Portable Onboard Sat TV For Your Boat

Easy and affordable onboard satellite HDTV—anywhere.

But there’s another option. Thanks to a new portable satellite system, you can enjoy sports, movies and other programming in high definition as you relax or overnight aboard your boat, whether in a marina or pulled up on a beach, while paying far less for the satellite equipment.

DISH Network has designed an affordable system utilizing a 7 ½-pound satellite dome antenna it calls Playmaker. Measuring roughly 16 inches in diameter and 13 inches tall, the Playmaker is based on the Carry-Out antenna from Winegard, which has gained popularity in the RV market. DISH bundles an easy-to-connect Wally receiver and the cables you need to quickly hook up everything to an onboard flat-screen TV set (DISH offers Playmaker Dual if you need support for two TVs). The hardware package starts at $348.

“We’re very passionate about the DISH Outdoors program,” says Amir Ahmed, senior vice president of sales at DISH. “The Playmaker is both affordable and easy to set up in minutes.”

The DISH “Outdoors” HD programming packages start at $42.99 per month for 50 popular channels, with no long-term contract required. If you already have DISH, it’s a $7 per month additional programming charge, and it too is pay as you go. Adding HD sports programming such as the NFL Network or NFL Red Zone ramps up the cost. One of the most popular is the American Top 120 Plus for $89.99 per month.

There are two caveats: One is the Playmaker needs a clear view of the southern sky with no obstructions, such as the flying bridge of the boat in the slip next to you, nearby trees, buildings and the like. Secondly, and more problematic for boats, the dome is designed to work on a stationary surface. That means the movement of boats and floating docks might result in signal loss.

DISH recommends using a fixed dock, seawall, or the shoreline where you’ve beached your boat for a party. A clever DIY boater might be able to build a shelf that attaches to a piling to temporarily secure the Playmaker for watching TV while docked. The antenna comes with 25 feet of coaxial cable to route back inside the boat and connect to the receiver. The Wally includes a 6-foot HDMI cable to connect with a TV, as well as a power cord to plug into your 120-volt AC shore power, generator or inverter.

After hooking up your new system, there will be a quick setup procedure that includes selecting the state you are currently in and pressing “Scan” to start scanning for satellites. Then the programming loads. After that, you can start watching TV.

I assembled the Playmaker dome and Wally receiver in about five minutes, and while the initial setup took about 20 minutes, each subsequent connection took only a few minutes. 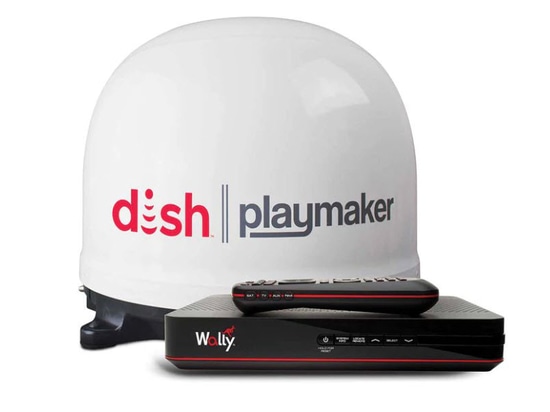 The Playmaker antenna and Wally receiver combine to offer sports, movies and other programming in high definition. 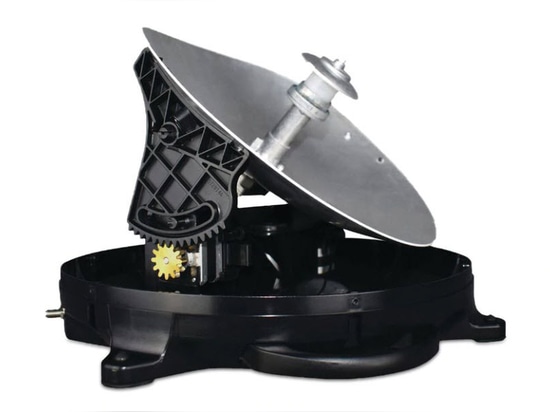 The Playmaker dish automatically locks in on available satellites for the best HDTV reception.