LANA is one of three Benetti giga-yacht constructions…

Following her official delivery last week, Benetti is now boarding M/Y ‘LANA’s final buyer’s supplies for her departure. LANA is one of three Benetti giga-yacht constructions – a program which is the result of significant investment that the shipyard has made over time both in terms of technical resources and investments, upgrading infrastructure and the construction processes.

LANA was kept at the yard during the winter season following the client’s desire to add, among others features, two Kongsberg wing stations, which are state of the art in terms of complexity and innovation, according to the yard.

“I am absolutely satisfied with the work done by Benetti and Imperial together. LANA represents a statement of building excellence, every technical feature, every aesthetic element, every single detail was executed to perfection. I am glad we all made her this way to prove a new level of the Italian shipbuilding industry,” commented the vessels owner.

LANA was designed entirely by Benetti’s in-house teams, and the naval architecture is by Pier Luigi Ausonio Naval Architecture (P.L.A.N.A). She is powered by twin diesel-electric engines of 2,800 kW each, has a top speed of 18.5 knots, and a range of 5,500 nm at 12 knots. She can accommodate up to 12 guests across eight cabins, including 7 VIP rooms on the main deck, and is tended by 34 crewmembers.

The testing and commissioning of LANA’s complex equipment was carried out in Livorno by Benetti technicians under the remote supervision and direction of the equipment’s manufacturers, respectively based in England, Norway and Sweden. In the current difficult circumstances, a remote approach had to be adopted, even on technical aspects of the vessel, but this proved to be a true test of a new way of working.

According to data provided by The Superyacht Agency, Benetti continues to predominantly build vessels between the 45m - 55m mark but has seen an increasing average LOA year on year since 2017. The giga-yacht market is certainly one that is less saturated than the 50m market, and is clearly one that Benetti is keen to continue to explore.

LANA, one of three 100m+ Benetti giga-yachts, has been described as “a testament to Benetti’s commitment to championing a new era of large yacht building in Italy” by a representative from the yard, who continued to state that she is the resounding success of the yard’s very first ‘giga-season’.

“We are proud to have delivered another giga-yacht in our giga-season,” commented Paolo Vitelli, President - Benetti. “LANA is an example of excellence: outstanding quality, unique style, and an icon of Made in Italy. A particular thanks to the owner who trusted Benetti for this creation. We are happy to have met all his expectations,” Vitelli concluded.

“Being linked to the second 100m+ superyacht ever delivered in Italy by the private shipyard Benetti is a pride that we share with the builder. It was a pleasure to collaborate once again with their professional teams and their dynamic behaviour in a proactive atmosphere,” commented Julia Stewart, Director of Imperial Yachts. “LANA is bold, unique, sleek and aggressive, boasting high ceilings up to 2.7m in height and mixing perfect experience at sea and unforgettable charter moments. She is now entering our Charter Central Agency fleet with a large array of destinations in her bucket list that she will explore.” 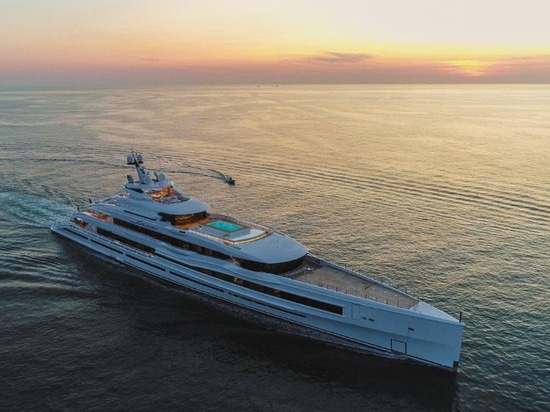 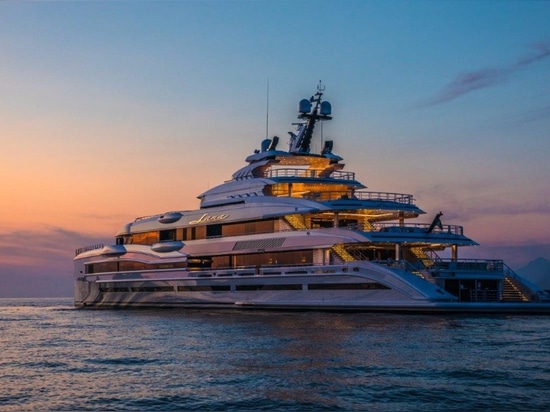 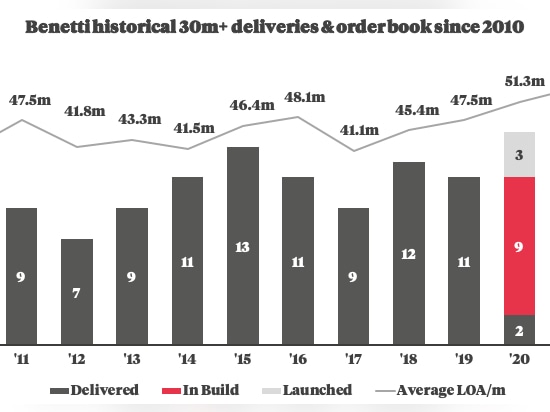