For compatible Simrad multifunction displays (MFD), the new software will offer C-MAP Embark passage planner synchronization, enabling boaters to sync user-created data such as routes, waypoints and tracks between C-MAP Embark and their MFDs. Boaters and anglers can use C-MAP Embark to plan upcoming trips on a smartphone, tablet or computer, keeping all the information they need to navigate or fish at their fingertips, all the time.

Previously, Naviop information has been accessed on a web browser running on Simrad MFDs. With this new upgrade, Naviop now runs natively as part of the operating system and is directly accessible via a Naviop button on the home screen. Integrating Naviop into the Simrad operating system yields faster runtimes, greater responsiveness and the capability to run full screen or as part of a split-screen.

In addition, the update gives Simrad users control of accessories, previously not compatible with Simrad displays. For users of Simrad NSO evo2, evo3 and NSS evo3, the FLIR M232 pan and tilt camera – one of FLIR’s smallest and most affordable marine thermal cameras – can be viewed and controlled from their Simrad MFD. The new update also enables compatibility with the new WM-4 Marine Satellite Receiver. With the WM-4 and an active SiriusXM® Marine Satellite Weather or Fish Mapping subscription, boaters in North America can view weather and fishing data on top of the chart.

For users of Simrad GO series displays, a new ‘App’ instrument page is available with an improved look and feel that provides a refreshed, modern aesthetic that matches the design of the rest of the system. It also delivers improved performance of the instrument page in horizontal, vertical and split screens, allowing for more than a single instrument panel to be displayed; it also expands the selection and presentation of specific gauges. The upgrade also allows users to control compatible Power-Pole® anchors with battery management functionality and enables support for up to six Mercury engines.

“We are very excited to offer our Simrad customers this enhanced functionality,” said Knut Frostad, CEO, Navico. “We are not only constantly working on adding new features, but also making the features we have faster, more streamlined and easier to use.”

For more information on the software update, visit www.simrad-yachting.com. 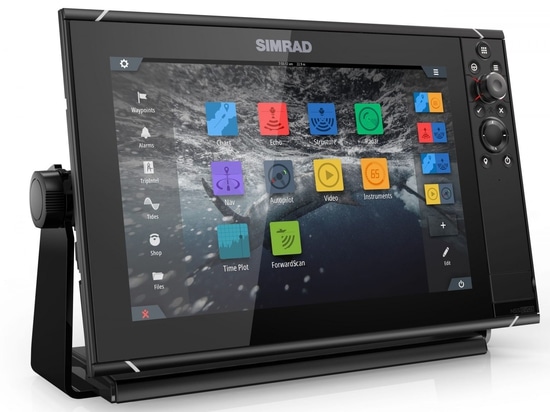