Guardian is designed to stop the boat engines within two seconds of a person going overboard.

Burgeoning Bluetooth technology has ushered in a host of new wireless engine kill switches from brands such as Fell Marine and Mercury Marine. T h e latest to appear is the Guardian engine cutoff from ACR Electronics.

Guardian, part of ACR’s Overboard Location Alert System (OLAS) product portfolio, is designed to stop the boat engines within two seconds of a person going overboard. When boating alone, this increases the chances that a victim can swim to back to the boat and reboard.

But Guardian is not just for solo boaters. In an MOB situation, the system will trigger a loud 85 dB alarm, alerting crewmembers to the emergency. After five seconds, the engine can be restarted.

Guardian can wirelessly connect up to 15 crewmembers via wearable, compact OLAS transmitters known as the Tag and Float-On. (The latter includes a light.) This allows the skipper to move freely around the boat without the constraint of a safety-stop lanyard.

The Tag and Float-On pair with the Guardian onboard module via Bluetooth. A break in that wireless connection due to distance or water immersion triggers an alarm and the engine to shut down.

The compact Guardian module connects to a vessel’s 12- or 24-volt power supply and existing kill switch. It will automatically connect to an OLAS transmitting device within 2-meter range. A pause mode allows the user to leave the boat with the engine idling.

The Guardian is easily operated via the ACR OLAS mobile app, provides an easy-to-read directional MOB screen showing where the alarm was triggered, and advises on the correct mayday call. The app also allows the captain to select which transmitters will trigger engine cutoff and which will set off MOB alarms only. Starting at $249.95; acrartex.com. 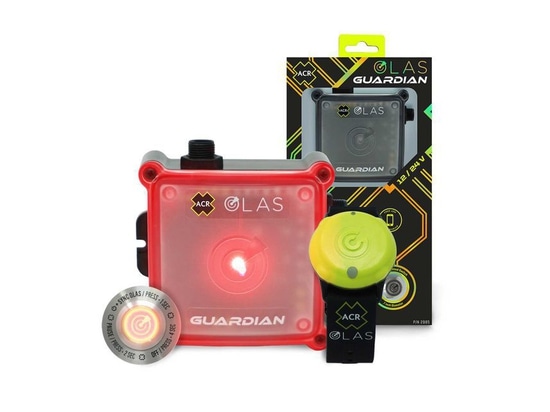 The Guardian module can wirelessly shut off the engine(s) in an MOB situation.