Increased possibilities for helicopter storage on board superyachts

Created by Tiger Tugs specifically for the superyacht market, the Typhoon tug has omni-directional capabilities…

Providing owners and guests with quick and easy access on and off the vessel, a helicopter is a huge asset on board any superyacht. However, a helicopter can also take up a large amount of valuable space on board, so how the helicopter is stored and handled is paramount to the superyacht ownership experience. The Typhoon tug was initially created out of necessity, when a superyacht client approached Tiger Tugs as a last resort after being unable to find a suitable solution on the market that could effectively stow and move a helicopter on board.

“The client had built a superyacht with a hangar on board, and the only way to get the helicopter into the hangar was to pick it up, rotate it 90 degrees and drive it in sideways,” explains Steve Hill, president and CEO of Tiger Tugs. “In addition, there was only two inches of clearance at each end of the hangar door, so the vehicle had to be very precise and reliable in its movement. We had the capability to design and build a tug that could meet all of these requirements, and that’s how the Typhoon was born.”

The Typhoon is the first helicopter tug of its kind to be designed specifically for the superyacht market. The tug is unique because of its omni-directional capability: it is able to move sideways at any angle, in any direction of the compass and pivot 360-degrees about its centre. It also comes with full wireless remote-control capability, enabling safe and single-handed operation.

“With its ability to move in any direction, the Typhoon can utilise a space in which other vehicles aren’t able to operate.”

Making simple work of moving helicopters within tight spaces, the Typhoon has opened up a new realm of possibilities for the housing and movement helicopters on board superyachts. “Real estate on superyachts is very limited and it is important to use every bit of it wisely,” adds Hill. “With its ability to move in any direction, the Typhoon can utilise a space in which other vehicles aren’t able to operate. It can also be used to move tenders or submarines around on board.”

Many superyachts are now incorporating elevators to store helicopters below deck after landing. Once below deck, these helicopters need to be moved sideways off the elevator platform and the Typhoon is the ideal solution to do so.

Being able to move the helicopter off the landing pad and into a storage compartment on board a superyacht is also very important from a maintenance perspective. “Helicopters are an expensive investment and protecting their sensitive electronics and flight systems from the corrosive marine air is extremely important,” Hill concludes. “A lot of these storage areas for helicopters take unusual manoeuvring in order to get the helicopter inside – we offer the safest, and sometimes only, solution to accomplish that goal.” 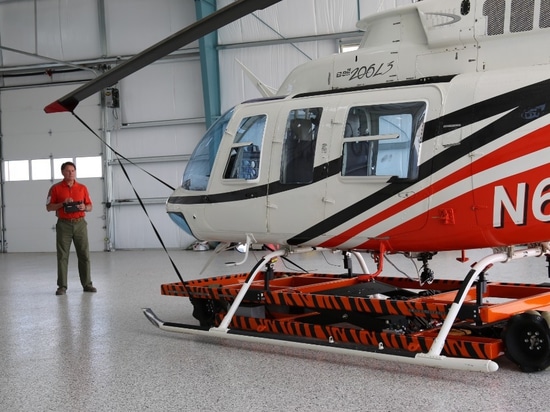 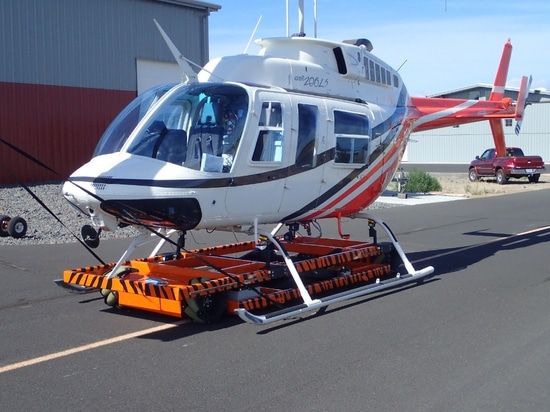