Bollinger delivers second of three FRCs to be homeported in Guam

Bollinger Shipyards LLC has delivered the 154’x25′ fast response cutter (FRC) Oliver Henry to the U.S. Coast Guard in Key West, Fla. This is the 163rd vessel Bollinger has delivered to the Coast Guard over a 35-year period and the 40th FRC delivered under the current program.

The Oliver Henry is the second of three FRCs to be homeported in Apra Harbor, Guam, increasing the presence for the U.S. Coast Guard in the Indo-Pacific Theater. Additionally, later in 2020, Bollinger will be delivering the first of six FRCs that will be homeported in Manama, Bahrain, which will replace the Island Class Patrol Boats supporting the Patrol Forces Southwest Asia, the U. S. Coast Guard’s largest unit outside of the U.S.

For the FRC, which has a draft of 9’6″, Bollinger is using a proven, in-service parent craft design based on the Damen Stan Patrol Boat 4708. Main propulsion comes from twin MTU 20V4000 M93L diesel engines, producing 2,900 hp each.

The homeporting of three FRCs in Guam is part of the Coast Guard’s “doubling down on Oceania,” allowing more frequent and longer patrols in an area where the Coast Guard has increased its presence over the past 18 months and is aligned with the U.S. position on maritime security in the Indo-Pacific.

Recently, U.S. Secretary of State Mike Pompeo declared that the United States “champions a free and open Indo-Pacific.” In a speech last year, Coast Guard Commandant Adm. Karl Schultz stressed the strategic importance of the service’s presence in the region saying, “We’re on a trajectory where the geostrategic importance of the Oceania region has not been higher here in decades, and it’s a place that the Coast Guard’s looking to be part of the whole-of-government solution set.”

While the last 20 weeks of the Oliver Henry’s build occurred during the Covid-19 global pandemic, Bollinger undertook precautions to ensure the health and safety of employees and maintain its delivery schedule. In addition to increased and enhanced sanitization practices across the shipyard, Bollinger enacted more liberal leave and remote work policies as well as altered shift schedules to promote social distancing.

“Bollinger is proud to continue enhancing and supporting the Coast Guard’s operational presence and mission in the Indo-Pacific region with the delivery of the Oliver Henry,” Bollinger President and CEO Ben Bordelon, said in a statement announcing the delivery. “Building ships for the U.S. Coast Guard provides critical assets to bolster our national security interests, both domestic and abroad. We are proud and humbled to be partners in the FRC program.”

Each FRC is named for an enlisted Coast Guard hero who distinguished himself or herself in the line of duty. Oliver Henry was the first minority service member to move from the wardroom to the engine room and rose rapidly through the ranks of enlisted mechanics. He was one of the service’s first minority warrant officers and served over 15 years of his 26-year career as a warrant. As a leader and role model, he mentored many of the next generation of service leaders, including officers and enlisted men. His career exemplified the Coast Guard’s core values of “honor, respect and devotion to duty” and serves as an inspiration to other enlisted men and women. 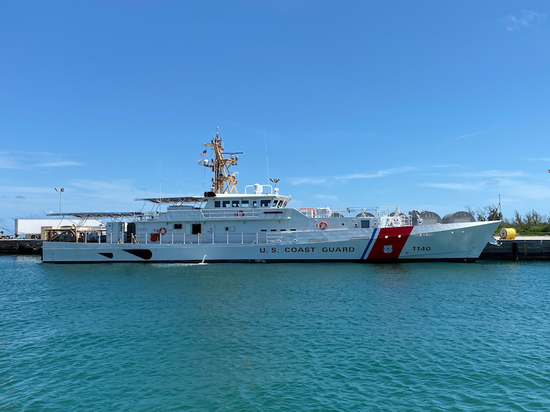 The Oliver Henry is the second of three FRCs to be homeported in Apra Harbor, Guam, increasing the presence for the U.S. Coast Guard in the Indo-Pacific Theater.