The Baltic 175 Pink Gin may have captured most of the headlines for her sheer size and cleverly engineered topside balconies, but below decks a collection of Cuban art and some phenomenal styling demand equal attention.

Mark Tucker’s team at Design Unlimited in the UK worked closely with the yacht’s owner, Professor Hans Georg Näder, with whom they had cooperated on his previous Pink Gin, to produce an unusual exercise in interior styling.

Professor Näder’s fascination with Cuba and his taste in art, fashion and music helped inspire Design Unlimited to use materials rarely seen aboard a yacht. They include fish skin, sealskin, fashioned leather, bamboo, pewter and 8,600-year-old bog oak combining to create an eclectic style that takes the visitor by surprise at every turn.

Not shy of throwing a party, Professor Näder wanted to create a platform for entertaining in a variety of environments above and below deck with music, art and unusual finishes very much part of the mix.

Stepping aboard Pink Gin from a tender is no ordinary experience. Instead of taking a boarding ladder to the deck, a topsides opening balcony leads guests directly into the port side lobby, the outboard facing bulkhead of which is taken up almost entirely by artwork fashioned from metal acetone drums. It’s by Roberto Diago, the Cuban artist, whose work can also be seen in the owner’s suite.

Once through the sliding glass safety doors, turn left, or forward, to move into the lower deck saloon dominated on the port side by an extraordinary table featuring dried flowers set in clear resin. The piece is by London-based Polish artist Marcin Rusak and was a constant talking point when we were aboard. One can waste hours examining each tiny petal suspended in the table-top.

The ornate glass chandelier above this table is a keepsake from the owner’s previous Pink Gin, as is the leather Louis Vuitton trunk furnishing the seating area opposite.

Design for the leatherwork adorning the lifting keel casing was inspired by bookbinding and the two deck support pillars located either side of the stairway leading to the upper saloon are finished in salmon skin. To port, in the upper saloon, is an Edelweiss Sygnet piano, finished in a subtle shade of pink – or is it purple? It’s positioned to overlook the lower saloon.

Opposite is a smaller dining area furnished with a large, U-shaped custom-made Chesterfield sofa and a table made of rare bog oak, a hard, dark timber possessing a particularly rich hue. This bog wood is thought to be almost 9,000 years old and would have been retrieved from a swamp or bog, the acidic qualities of which preserve and form the colouring we see today. The oak cabin soles in this and most other areas are finished with a type of distressed paintwork that helps create a less formal atmosphere.

No visitor should leave without a visit to the day head. It’s decorated with a stunning bespoke wallpaper pattern of coloured fish set on a jet-black background. Design Unlimited sourced it and it will leave a lasting impression.

Forward of the main saloon are four guest cabins, one double, a twin and two tiered twins, all with en-suite bathrooms equipped with unusual taps and fittings finished in a type of oxidised metallic bronze; industrial chic might be a way of describing it.

A lobby serving the forward cabins is illuminated naturally using glass decklights by way of the mast. It features a sculpture by Roberto Fabelo, another notable Cuban artist.

Of all the areas in Pink Gin’s accommodation, it is perhaps the owner’s suite that succeeds more than any other as a living space and styling exercise, not least because of the fantastic effect created by the topside opening balcony.

This is a large, starboard-side aperture creating a stunning framed vista for the cabin’s occupants and, of course, direct access to the water. You enter the suite through an office area furnished with a desk, the top of which is finished in laser cut stingray skin and horn. There’s nothing understated about Pink Gin.

This leads into the main sleeping accommodation furnished with a king-sized double, the base of which is constructed of bamboo. What is referred to as an ‘art wall’, facing the bed, is dominated by another work by Roberto Diago, this time featuring coarsely finished painted timber from old Cuban fishing boats. This sets the tone for a cabin in which the style is interesting and challenging rather than predictable.

The ‘his and hers’ full-width head and shower room again features the industrial chic styling seen elsewhere in the yacht. It is lined with what look like substantial white tiles, complete with heavy-duty grouting. In fact, the finish comes in composite sheets, made by Baltic, which are notably light.

The effect is remarkable. Another stunning feature in the owner’s suite and this time in a walk-in wardrobe and dressing room, is a carpet using a pattern inspiration taken from one of Professor Näder’s favourite French scarfs.

All the crew accommodation, plus one other large guest cabin are located aft. One of the many advantages of the port side opening into the lobby is that the crew and particularly the galley staff can, if necessary, transfer stores quickly and easily from a tender.

Turn right, or aft, and you step immediately into the large galley, which has its own style comprising granite counter tops that no doubt had the weight police in tears, and composite cabinet doors adorned with what is made to look like a hammered metal finish. There is sleeping accommodation and a mess area for up to nine crew.

On deck there is no let up in the quest for eye-catching style. The aged bog oak can again be seen in the cap rail and the bar occupying the middle of three cockpit areas. The main cockpit table is by I Vassalletti, master craftsmen from Tuscany who have used waxed teak and pewter in its construction. The aforementioned sealskin is used to finish the handrails around the bar.

The cockpit is illuminated by two vast Murano glass chandeliers suspended from the boom. They are so heavy they need to be lifted into place with a block and tackle. Design Unlimited in their press release state: ‘Pink Gin is a yacht that cannot be categorised within existing superyacht parameters’. It’s quite a claim and they might be right. 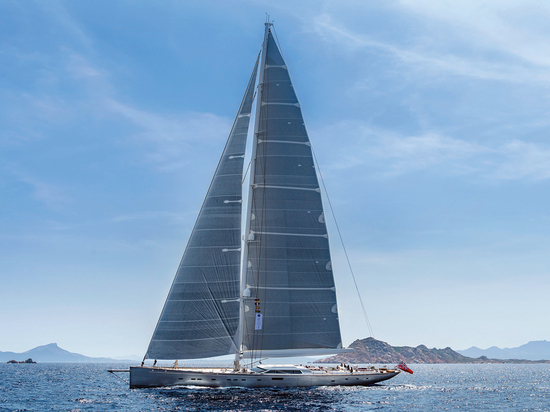 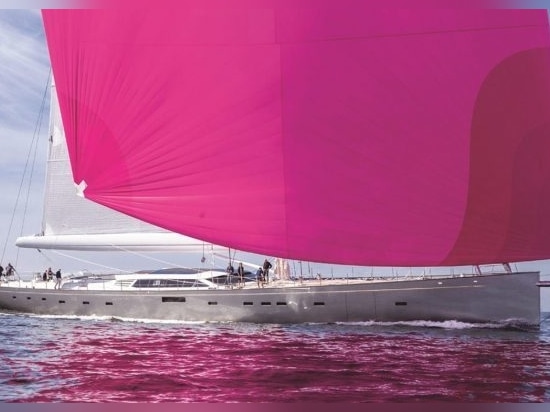 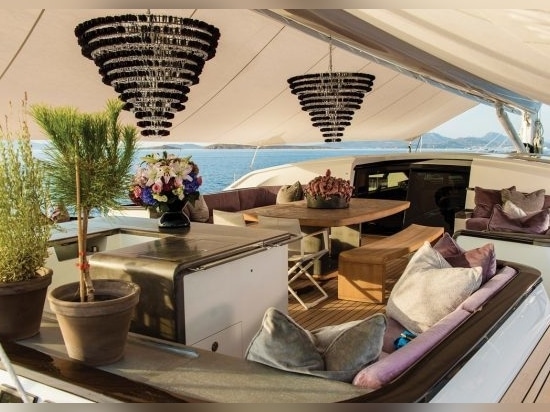 The pewter covered bar in a cockpit lit by two Murano chandeliers. 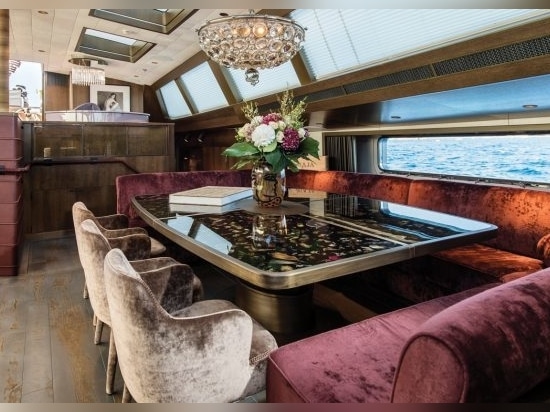 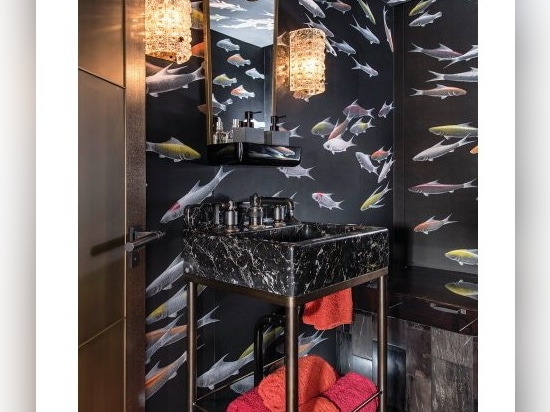 Desing Unlimited sourced the unusual wallpaper for the day head 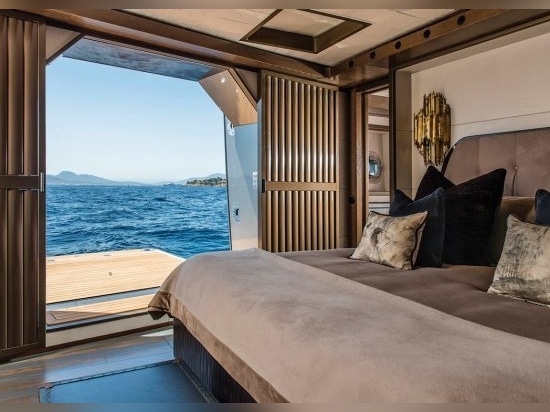