Calypso NMEA Connect Plus: A versatile gateway and range extender to NMEA 0183, NMEA 2000, Bluetooth and WiFi

We are thrilled to present our new gateway.

The NMEA CONNECT PLUS connects any Calypso ultrasonic wind meter to a NMEA183 or NMEA000 network, and/or extends your Bluetooth and WIFI signal range. The NCP product range has been designed for maximum versatility, with a number of different models offered:

BLE to NMEA 0183: It converts your ULTRASONIC Portable wind data into NMEA 0183 sentences. It also acts as a BLE repeater allowing you to connect up to 2 Bluetooth devices to monitor your wind data at the same time.

BLE to NMEA 2000: You can use your ULTRASONIC Portable in an NMEA 2000 network by converting the BLE data received from your portable to NMEA 2000 PGNs (messages). It also acts as a BLE repeater allowing you to connect up to 2 Bluetooth devices to monitor your wind data at the same time.

Wired to NMEA2000 + BLE: You can use your ULTRASONIC Wired or Ultra Low Power (ULP485) in an NMEA 2000 network by converting the NMEA0183 wind sentences into NMEA 2000 PGNs. Additionally it sends the data through Bluetooth and allows you to connect up to 2 Bluetooth devices at the same time.

High End: The most versatile model. You can receive wind data from any Ultrasonic wind meter within Calypso’s product range (by the NMEA 0183 interface or by Bluetooth signal), and convert the wind data into NMEA 0183 sentences (wired and Wi‐Fi), NMEA 2000 PGNs and Bluetooth. It can also be used as range‐extender when set up as a Wi‐Fi Repeater. This model selects the wind data source as “first come first served” and it translate it to all output interfaces (NMEA 0183, NMEA 2000, BLE, or WIFI).

NMEA 2000 backbone power: when connected, the NCP is powered from it. This option is compatible with 12VDC supplies typically using 126mA (3 LEN) at 12 VDC. This power source is isolated from the rest of the circuit.

USB power: Available when other sources are not available. When another source is available the USB power drain is minimal. USB also used to upgrade firmware.

Dedicated VCC input: A dedicated 12VDC input can be used to power the NCP.

NMEA CONNECT PLUS is the result of hundreds of engineering hours striving to design and manufacture what the customer is looking for. For further information: CalypsoInstruments.com 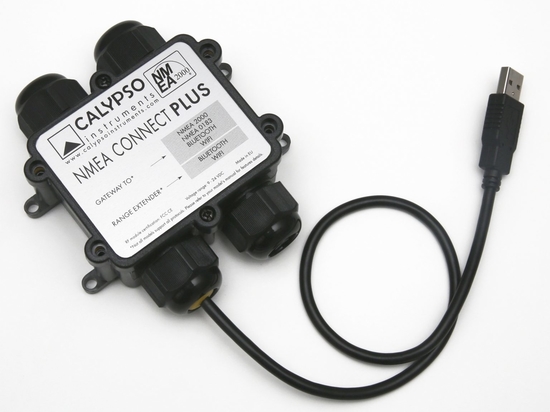