Mercury Marine’s 4.6 liter V8 outboard platform is like a tree with many branches. From the root V8 Four Stroke engine, many varieties of outboard spring to cover the many niches of marine propulsion: from luxury-performance Verado, to the commercial Sea Pro lineup, to the Pro XS tournament bass engine.

And of course, Mercury Racing, the branch from which the new APEX 360 outboard comes from.

Mercury Racing, a separate division of Mercury Marine, builds the R series of outboards for performance-oriented consumers, plus performance sterndrives, as well as manufacturing refined propellers, developing special lubricants and creating a host of parts and accessories that serve performance boaters. It is about the only player in the high-performance propulsion and parts and accessories space. The new APEX 360, stylized as APX on the cowl, confirms that. Just as there is no other marine engine maker like Mercury Racing there is no other outboard like this one on the market.

“This is a, ‘racing competition,’ engine,” asserts, Stuart Halley, Mercury Racing General Manager. That is to distinguish Apex series outboards from Mercury Racing’s high-performance consumer offerings. So, what’s the diff?

The 360 APX is specifically intended to power Formula One tunnel boats on the UIM F1 H2O World Championship. It is only available to qualified race teams. Warranty? There is none. It also boasts a 12-inch midsection, ideal for tunnel boats, but not so much for a center console or runabout. It is rated at 360 propshaft horsepower, redlines at 7000 rpm and the 12-inch midsection features integral trim and lift.

The 360 APX is normally aspirated, retains its double overhead cam/four-valve architecture and the compression ratio is increased from 10:1 to 11:1. The powerhead is fitted with a short-runner intake manifold mated to a cold-air induction system vented through the cowl. The engine calibration is modified to take full advantage of the powerhead modifications. The 360 APX uses a 24-volt starter for faster dock-side starting in competition. The above water exhaust provides unrestricted flow, but also ensures race fans hear race noise. Additionally, it produces 90% lower emissions than current two-stroke racing engines. It is notable that Union Internationale Motonautique (UIM) President, Dr. Raffaele Chiulli, believes this engine shows the race organizations commitment to lowered emissions. Halley posits that between the engines efficiency, and its ability to burn premium pump gas instead of race fuel, it will markedly lower race teams fuel bills. 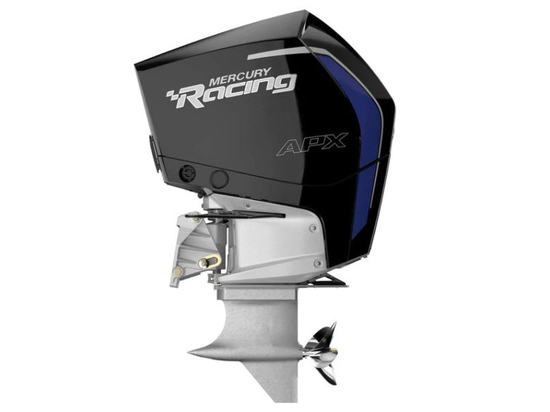 A specialized gearcase and midsection help make this a racing competition outboard.