The yacht is distinguished by 220m² of interconnected exterior floor surfaces…

Custom Line 106’ is a designer planing yacht that has been introduced by Custom Line to showcase a different view on timeless yachting. It boasts many factors of distinction, first and foremost its design and the organisation of the large volumes and spaces.

The Custom Line 106’ is 32.82m LOA, and is a product of the partnership between the Francesco Paszkowski Design studio, Ferretti Group's Engineering Department and the Product Strategy Committee led by Mr. Piero Ferrari.

The design of the lines on the bottom and the hull are intended to help it to replicate and build upon the hydrodynamic performance of the brand’s updated planing range. The profile is sleek and powerful, with taut lines running from the stern to the forward area, generating an alternation of materials and colours in the light structural surfaces and dark tinted windows.

The interiors have been developed by Francesco Paszkowski in collaboration with Margherita Casprini, and continue in the same vein as Custom Line's other planing vessels: exploring greater formal balance and distinctive, strong colour contrasts in the furnishings and coverings.

The yacht is distinguished by 220m² of exterior floor surfaces, all interconnected. Making a comeback is the concept of the flybridge being directly connected to the bow through a port walkway, while the starboard walkway leads to the cockpit, from which the flybridge is reached using the port stairway.

To the stern is an advanced version of the patented DMT - Dual Mode Transom system. It features two sliding doors that cover the stairs when the vessel is in motion, thus providing a clean-cut appearance. When the ship stops, they slide inside the hatch so that guests can climb up. From the garage, a Williams DieselJet505 tender and a three-person jet ski can be lowered into the water.

It is equipped with electro-hydraulic stabilizing fins, offering both underway and zero-speed modes. On request, gyroscopic stabilizers can also be fitted for maximum comfort at anchor. Custom Line 106’ comes with an innovative entertainment system built in collaboration with C.N.Sat, installed in the lounge on the main deck. It can be managed by an iPad, meaning that the various remote controls can be replaced by a single device. This technological solution can be extended to all of the different parts of the maxi yacht and it can also be used in conjunction with the owner’s personal devices. 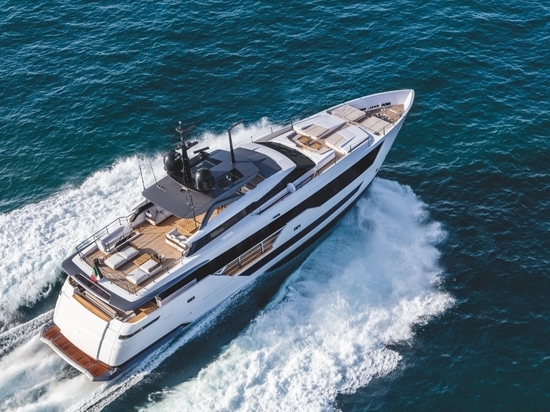 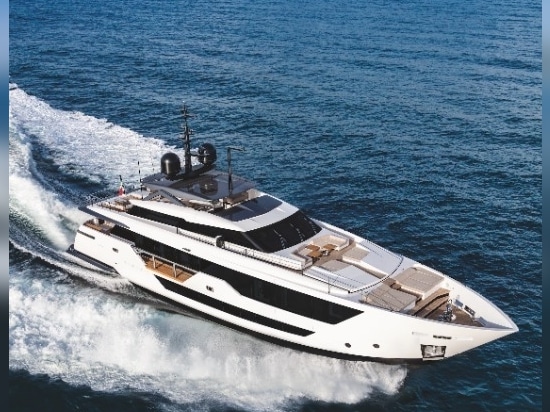