Pershing
Via Enrico Mattei, 26, 60125 Ancona AN, Italy
Add to favorites

The Italian shipyard Pershing, one of eight brands that form the Ferretti Group, revealed a new flagship last September 2019. Officially marking the brand’s entry into the superyacht sector, the launch of the flagship vessel Pershing 140 is also the first Pershing to be manufactured in aluminium.

A result of the collaboration between architect Fulvio De Simoni, the Ferretti Group Product Strategy Committee (led by engineer Piero Ferrari), and the Group’s Engineering Department, the 43.4m yacht is the first Pershing manufactured at the Ferretti Group Superyacht Yard in Ancona.

Developed across three spacious decks, the new flagship is intended to emanate prowess on water, showcasing the thrill that Pershing can offer. The project’s philosophy is based on the will to maintain Pershing’s unequalled performance, albeit with different class weights and dimensions: those of a superyacht.

The hull platform was specifically designed for high performance, featuring hydrodynamic capabilities at high speeds and the propulsion of four MTU 16V2000 M96L engines, each of 2,600 HP, achieving the target of taking the first 43.3m LOA Pershing superyacht to a top speed of 38 knots.

Consistent with the DNA of the Pershing range, the domotics and electronic systems are all state-of-the-art, and, in line with Ferretti Group’s tradition of making high performance its core value, the new 140-footer is equipped with three Seakeeper 35’s to assure top comfort also at anchor.

The Pershing 140 is also the first to feature a raised cockpit directly connected to the sun deck; the first to have an owner-dedicated area on the main deck and the first to maximise the enjoyment of all decks and outdoor areas possible by joining them all into a beach club area, which becomes expandable with three fold-out sides.

Stylistically, Pershing believes that the new flagship stands out for its sleek lines, emblematic of the brand’s sporty and competitive character. It also combines design innovations with some of the brand’s most iconic details, such as the two lateral wings that are integrated into its superstructure and then connected at the start of the walkways to the gunwale. The prow, which is instead decidedly contemporary in design, contributes to enhancing the model’s aerodynamics.

The owner’s quarters are a grand full-beam private suite that the owner can modify and decorate at will. Yard-fitted with a double bed, a walk-in closet on the left-hand side and a parlour on the right, the suite benefits from a magnificent view. The large bathroom, fitted with a shower separated from the bathtub, is located at the head of the bow.

Pershing 140 owners can design their superyacht alongside designers of the Studio Fulvio De Simoni Firm and by the Project Architects of the Superyacht Yard of Ferretti Group. The entire interior design can be tailored to mirror the owner’s style, by making additions to or modifying the layout options offered by the shipyard. She can accommodate 18 people on board within five cabins, seven guest bathrooms (including one owner bathroom), and has four crew cabins. 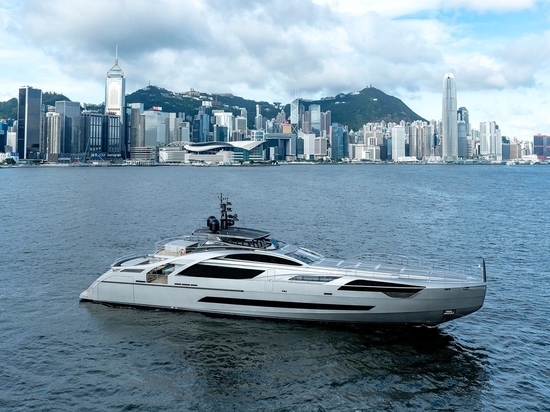