When an experienced and passionate owner was looking to build a daring new round-the-world super sailing yacht, he needed a builder that could match his level of innovation and boundary-pushing ideas. Enter, Baltic Yachts.

Sailing yacht Canova is the latest in the Finnish builder’s high-tech fleet of super cruisers and follows in the footsteps of greats such as Visione, Hetaios and Pink Gin VI – but with one big exception: this is Baltic’s first zero-emission 100ft+ project, leading the way in a new generation of environmentally conscious and ocean-friendly superyachts.

“There is a lot of innovation onboard Canova,” says Henry Hawkins, Baltic’s Executive Vice President, “all of which was client-driven.” Synonymous with pioneering discoveries in the field of super sailing yachts, Baltic was already up to speed with everything on Canova’s owner’s ambitious wish-list. “There was nothing really unheard of for us being proposed in the brief, but in terms of taking things from investigation to implementation, a lot of the credit can got to the client.”

Two of these primary innovations Hawkins refers to are the power regeneration system that can theoretically provide an endless amount of green energy for Canova to consume, and the Dynamic Stability System (DSS) foil, developed by Infiniti Yachts.

The DSS has proved highly effective in smaller vessels but Baltic Yachts is the first superyacht builder to incorporte this technology into a luxury yacht of this size. The nine-metre-long foil is mounted inside the hull below the waterline and extends outward from either side to deliver improved performance but with stability as its main purpose. “

In general terms, the DSS foil hugely decreases the heeling and pitching motions while underway,” Hawkins explains “What would be an impossible sit-down lunch under normal sailing conditions, now becomes a more manageable affair at sea, especially on bigger yachts such as this with its large deck spaces. It’s a long way from the top to the bottom at a heel angle of 20-22 degrees, so for that angle to be reduced by 10-12 degrees makes a massive difference.”

From a design perspective, Canova had to be so much more than just an eco-friendly experiment. Having owned several boats in the past from yards such as Wally, Nautor’s Swan and even Baltic, Canova’sowner was looking for a completely new experience with his new boat. Simplicity, functionality, privacy and above all, comfort was what would become the common threads that connect every part of the yacht. “He had a dream of circumnavigating the world with this boat,” explains designer Lucio Micheletti.

Subsequently, Micheletti + Partners designed a modern craft inspired by the automotive world as a home-away-from-home with a functional living experience at its centre. A distinctive deckhouse wing appears to be floating effortlessly on top of a glass and wooden base - materials that were carried through to the fluid and airy interior. “We worked on the total wellbeing of the passengers, trying to evaluate every aesthetic, from acoustics to lighting. We opened a dialogue between life on board and the surrounding sea,” says Micheletti.

For the Milan-based Micheletti, the project’s design was a highly personal journey. “I met the owner through this project and I found a very knowledgeable person, a lover of art and life at sea,” he recalls. “The true art of a yacht project lies in resonating with the owner, and we succeeded in creating a space where he can find a point of reference each time he returns to the boat. A place where he can recognise himself and that represents his personality.”

Teak from the outside has been carried through as a central theme to the interior where it is used in various applications, from matte-finished flooring to high-gloss handrails. The large dinette and lounge area inside the deckhouse form the social heart of the yacht and transforms into a trendy and elegant relaxation area at night with enhanced mood lighting and an unobstructed view through the glazed windows that wrap around the structure.

Below deck, a three-cabin layout provides accommodation for up to six guests, culminating in the 65-square-metre full-beam master suite that is placed amidships. The suite features a unique 'gimbal bed' which contains a gyro-like device that stabilises the bed against the motion of the sea for maximum comfort, and the space is finished with a private lounge and study, a sauna and a hidden treadmill.

Canova is the first electrically-driven sailing yacht Baltic has built and the first with regeneration capacity that could effectively deliver a zero-emissions cruising experience. “People’s desire to become more aware of the environment and their footprint on the planet is a key point of focus for us,” says Hawkins. While under sail, the highly-efficient front-facing propeller acts as a hydro-generator which turns the 420 kW electric motor, storing energy in the six banks of batteries on board. “When you are sailing and regenerating power at the same time, you should not have to burn any fossil fuels. The supply is around 20 KW and upwards, which should be enough for the household load.”

One of the requirements was to achieve a 10-hour operational range for the batteries without the need for generator power. These generators can also be used to charge the batteries while sailing, creating silent power for when Canova reaches her destination. “The regeneration, storage and use of power on yachts is becoming a very hot topic and we already have similar drives with regenerative capabilities being installed on the Baltic 117 and 68 Cafe Racer projects that are currently under construction.”

Designed to be operated in remote areas around the world, simplicity in every system on board was a key part of Canova’s brief. This had to be true for her sail-handling setup too, which was expertly devised by naval architects Farr Yacht Design together with Baltic Yachts and North Sails. Expected to sail whenever the wind allows, a carbon rig by Rondal with Carbo-link standing rigging supports an all-round sail plan that is easy to handle for her crew and requires minimal maintenance. “The rig is designed to be left-hoisted in areas where you might not expect it,” explains Hawkins. “Instead of a Code Zero, Canova has a quad sail that is double sheeted, enabling the sail to be used across a much wider wind range where another sail might have to be taken down.”

The big staysail also comes with a few tricks of its own, running on a self-tacking track which eliminates the need to use sheets when reaching upwind using this sail. With sails generally designed for optimum performance at full-hoist, Canova’s efficient square-top main is equally powerful with one reef in it, allowing the head of the sail to come in below the top deflector and simplifying gybing and tacking manoeuvres.

Canova exudes an air of relaxation and tranquillity palpable from the minute one steps aboard. The spacious guest cockpit and inviting built-in lounge are where family and friends get together after a long day at sea. A floating hardtop extends aft from the deckhouse and creates a wind-free corner for guests to relax while underway, with single-piece drop-down glass panels providing shelter without interrupting the view – an area that Micheletti explains required some creative thinking. “The most complex part was the design of the deckhouse with its ‘wing’ which had to protect the cockpit and make the boat ‘fly’,” he says.

The signature teak-cladded side pillars in particular were designed as a functional detail instead of a decorative feature, while still suiting the overall aesthetic. Beneath Canova’sforedeck, a custom 7-metre tender, capable of a 45-knot top speed, is stowed in a discrete garage with built-in refuelling tanks that add to the yacht’s independence when cruising in remote areas. 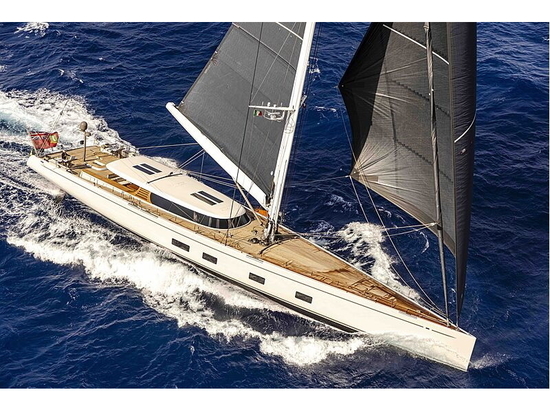 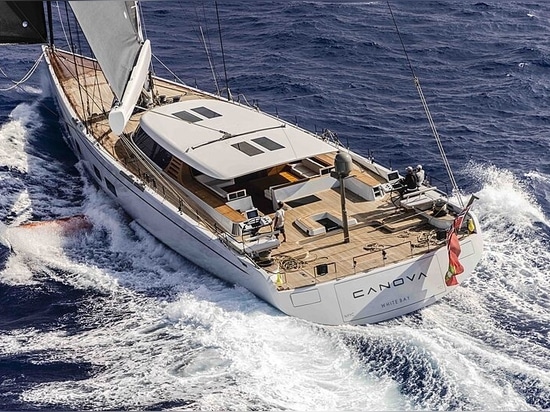 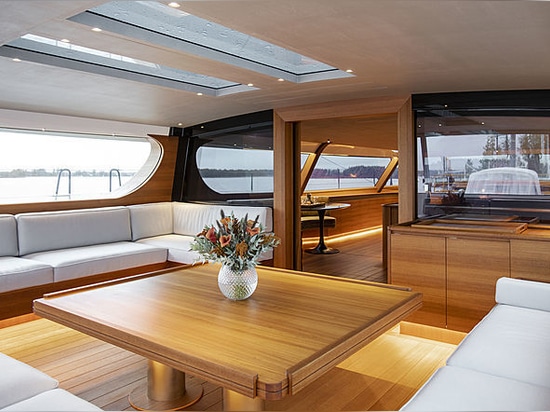 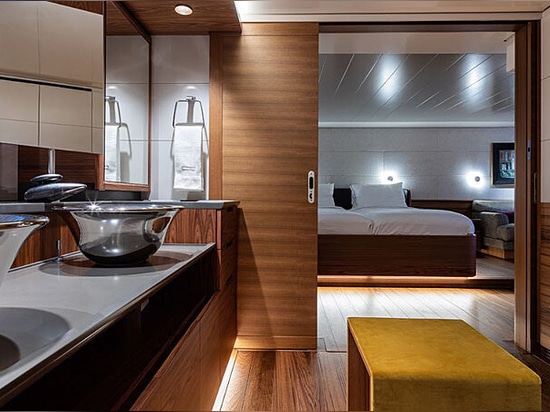 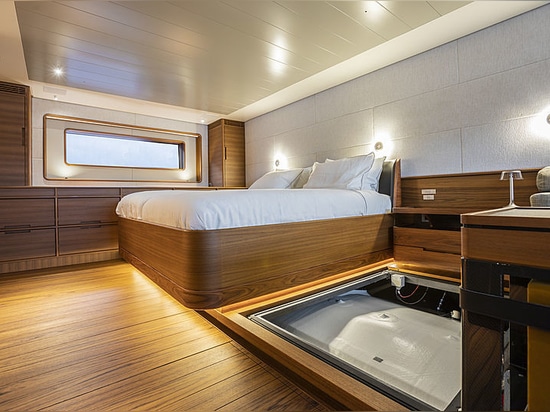 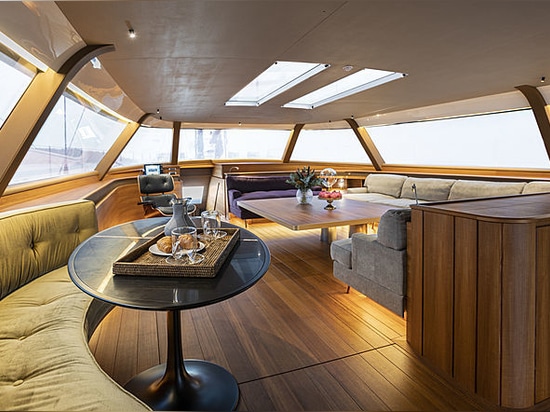