Whether you’re ahead or behind, with a good hand-bearing compass you’ll be able to base your tactical decisions on solid data and reassure even the crankiest of skippers. From Sailing World, November 1996

As the new watch captain emerges on deck, his counterpart begins his hand-off with a report on the competition, “We’ve dropped them back 5 degrees in the last hour, plus the range has doubled, so we’ve been doing great since the wind came ahead.”

Every sailor likes to know how they are doing in a race. At turning marks, you get a definite read on your position. On the open course, tracking your gains or losses is more difficult, but is invaluable when assessing the effect of changes in sail trim or steering technique and for planning your overall strategy. A hand-bearing compass can provide a wealth of information to this end. When used properly, and interpreted effectively, it is an indispensable piece of racing gear for boats from 24 feet (and sometimes smaller) to maxis.

Like your computer, however, these tools can be a mixed blessing — potentially distracting an inexperienced crew and generating erroneous information that muddles your quest for speed. So, the first step toward incorporating a hand-bearing compass into your arsenal of tactical tools is a little training, and every member of the crew should participate.

There are two families of hand-bearing compasses, electronic and traditional analog compasses. Both can be used to obtain an accurate magnetic bearing on the competition or a mark of the course. This may sound simple, but as the waves get bigger, it is impossible to hold the compass rock steady, and the read-out will bounce around a bit. The first step to using either type is to set your target in the site (when the target is a nearby boat, aim at your position on the other boat) and hold it there as steady as possible for a few seconds before beginning any readings. This pre-reading time allows the compass to get oriented. While analog compasses like the venerable Vion Mini 2000 “hockey puck” require the operator to visually average the headings on a swaying compass card. Analog compasses must also be held relatively level so the card is free to rotate. In rough seas, obtaining an accurate reading on an analog compass can be like tuning in a distant radio station—you have to find the center point between the swings to each side of the dial.

Accuracy equals repeatability, so it’s a good idea to practice on dry land. Take a fix on a far-away object, passing the compass around to get the crew accustomed to repeating the reading. On bigger boats (35 feet and over), however, the helmsman’s binnacle compass, with its heavy dampening and large card, can rival any of its hand-held brethren. But it lacks the portability and ease of use from the weather rail that makes a hand-bearing compass so valuable.

Remember, repeatability is key, so when you start taking readings on the water, take several to check your technique. Ideally, each member of the crew would get the same reading if taken from the same position on the boat. However, inexperience, improper targeting, and magnet-affecting items in or on clothing that cause the compass to lose track of magnetic north — like metal zippers — can all affect repeatability. In a race, I prefer to assign one person the job of taking bearings.

Once you have the “number,” you must interpret it. For example, you can use it to judge the layline to a mark, or who will cross ahead as boats converge on opposite tacks. If you are on starboard and the bearing of an approaching port-tacker increases over time, then it will cross ahead if the conditions remain the same. You can also determine how you stand on an upwind or dead downwind leg. First determine the “true-wind direction” in magnetic degrees — easy if you have fancy instruments, but if not, split the difference between your port and starboard headings. (When sailing downwind, take the reciprocal of this split difference.) Then add or subtract 90 degrees to determine your “line of equality.” Finally, take a fix on your competitor to ascertain if he is ahead or behind that line of equality.

Let’s say your line of equality lies two boatlengths ahead of a competitor who is .25 miles abeam of you (see diagram). Now let’s assume you lose one boatlength getting up to speed after a tack, and the wind doesn’t shift. If you tack, you should cross that boat by one boatlength.

Be aware that a hand-bearing compass is subject to the same errors of deviation as any compass, and to be truly accurate when using two different compasses, such as in this example, you should take their respective deviation errors into account. Tacticians at the grand-prix level often use “enemy bearings” in more complicated situations that require a general understanding of how bearing and range interrelate. Most sailors think, erroneously, that if you are “gaining” bearing on your competition, you are gaining in the race. This is often not true. Take, for instance, an upwind leg with a north wind. When your enemy on starboard crosses 10 lengths clear ahead of your bow, his bearing is due north. Let’s assume there are no shifts and you are both sailing equally fast. As you diverge, his bearing will decrease slowly, eventually to almost 270 degrees, yet he is still 10 boatlengths ahead. This proves that bearing alone cannot tell you the whole story. You also need to factor in range.

Most of us don’t have the budget to afford a high-tech laser-rangefinder/compass used by America’s Cup teams. Some electronic hand-bearing compasses have crude rangefinders, and your thumb works in a pinch, but as long as you understand the relationship between range and bearing, your bearing readings will be invaluable. We had a saying aboard Stars & Stripes during the ’87 America’s Cup, ''bearing is king," meaning if you gain bearing, you are faster. This is true in the classic, starting line case where the boats start even on a square line, and it applies equally well on the open course. When the boats are even, a gain in bearing reflects a true gain in the race. But as one boat pulls ahead, bearing gains become less important than gains in range (see first diagram).

In distance races, the hand-bearing compass is valuable since you are often well separated from, but in sight of, the competition, drag racing for the next mark. I often rely on reports from the “scope” to assess small changes in sailing technique, and at night there is nothing better to keep the crew focused on going fast. If possible, keep a written record of the competition’s change in bearing over time.

On a reach, one-tack beat, or run, you should be selective of the targets used as yardsticks. Whenever possible, choose one boat on either side as near to 3 o’clock and 9 o’clock (12 o' clock being straight ahead) as possible, since with these boats “bearing is king.” Tracking the bearing of a boat nearly dead ahead or astern may provide interesting information on your relative courses (probably just as apparent with the naked eye), but it will tell you nothing about whether you are gaining or losing, since, in this case, range is king.

No matter how expert you become in obtaining highly repeatable bearings, don’t let the compass totally replace your eye —often the fastest and most accurate measuring device —especially when boats are close together. But when used effectively by a knowledgeable crew, the information gleaned from a hand-bearing compass can help you sail faster and smarter. Just don’t drop it in the water! 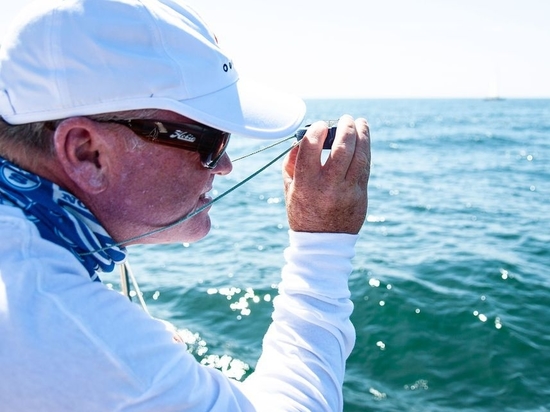 When it comes to tracking the competition and making tactical calls, the trusty hand-bearing compass can serve as both gut check and decision maker.