Gulf Craft has launched the Majesty 175, the world’s largest composite yacht, at a ceremony at the Shipyard in the United Arab Emirates.

At 54 metres the Majesty 175 is Gulf Craft’s largest yacht to date and took four years from inception to completion.

Gulf Craft’s chairman, Mohammed Hussein Alshaali, said that it was a very special day in the company’s history. “I’m proud of everyone who contributed to this magnificent jewel and to launch it today as the largest composite production megayacht in the world,” he said.

“I believe that with building the Majesty 175, we have set a new trend in the market that many shipyards in the world will follow."

The yacht was designed by Cristiano Gatto Design Studio while the naval architecture was provided by Massimo Gregori of the Yankee Delta Studio. With a gross tonnage of 780, the Majesty 175 has seven staterooms accommodating up to 14 guests, six crew cabins and private captain accommodation.

Built to MCA regulations and using composite materials such as carbon fibre and vinylester, the Majesty 175 draws only 2.25 metres of water allowing her to cruise through low draft areas.

She is propelled by two fixed pitch six-blade propellers and powered by twin MTU engines 12V 4000 M63 developing 1500kW each. Electrical supply comes from a pair of 175 kW Kohler generators and on completion the yacht will have a full speed of 16.5 knots and a range of 4,000 nm. 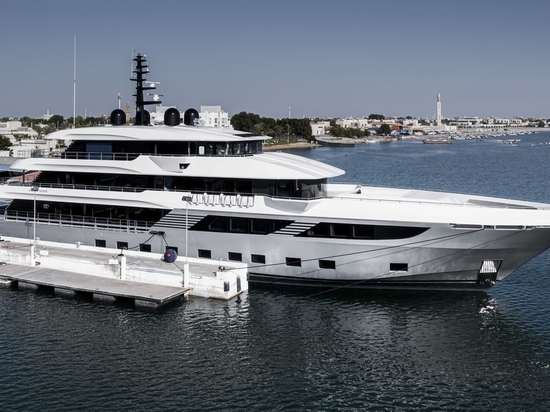