The recyclable boats by Northern Light Composites, just awarded at the Genoa Boat Show, reach the international audience and are one of the protagonists of the award that World Sailing, the International Sailing Federation, together with the foundation 11th Hour Racing, assigns annually to the marine-focused sustainability initiatives.

The innovative Italian startup presented to the world federation their ecoprimus and ecoracer projects - the first recyclable boats built from 100% linen and with a recycled core - which were chosen by the jury for the ambitious goal of creating a new circular economy in boating, for the recyclability guaranteed by the thermoplastic resin and the choice of using natural fibers.

Together with Northern Light Composites, on the shortlist of four candidates there are also the 49er and Nacra17 2019 World Championship organized in New Zealand, the American MarkSetBot which offers robotic buoys and Thai Starboard boards.

To support the nlcomp candidacy it will be possible to vote on the World Sailing platform from November 27 to December 4, 2020, while the winner of the Sustainability Award will be announced on December 9, 2020.

The winner of the World Sailing 11th Hour Racing Sustainability Award will receive a $10,000 USD prize to help further their sustainability activities, as well as an iconic trophy made from recycled carbon fibre which was sourced from an America's Cup boat and infused with bio resin.

The members of Northern Light Comp team are the three founders Fabio Bignolini, Andrea Paduano and Piernicola Paoletti, and the design team that involves Matteo Polli, Alessandro Pera, Mattia Sconocchia, Gianluca Salateo, Roberto Baraccani and Roberto Spata who will take care of the optimization of ecoracer.

Nlcomp's partners for the project are Arkema, who supplied the resin, and Armare, for the ropes. Montura is clothing partner, while the technical partners are Shin Software, QI Composites, Eco-Technilin, Bcomp, Meg 3D Print, Onnit and AG Plus. 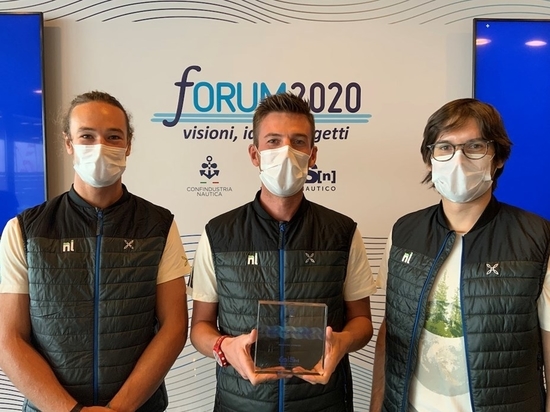