The HydroFlyer: The World's Most Advanced eFoil

Designed in collaboration with canadian inventor jerry mcarthur, unifoil announces the release of its latest eFoil, ‘the hydroflyer’. like other eFoils on the market, the watercraft requires no fuel, letting riders glide over the water with no fumes and no pollution. however, to set the hydroflyer apart from its competitors, mcarthur and unifoil have incorporated detachable handlebars to make it easier to control.

‘I became obsessed with e-Foiling several years ago, but I was hesitant to teach my friends and family after seeing some of the horrific accidents watching other people learn’, says jerry mcarthur, lead designer of the hydroflyer. ‘I wanted to find a way to make eFoiling safer and more accessible to everyone, without taking away the feeling of speed and excitement of flying over water.’

Mcarthur continues, ‘my background of riding dirt bikes and snowmobiles led me to adding handlebars. adding 4 points of contact makes eFoiling easier to learn and balance. this enables a safer learning curve, more control, and a faster ride. this design of the hydroflyer is easier to learn for beginners, while also allowing advanced riders to perform more extreme maneuvers. there’s only upside to this improved layout.’

Designed for beginners and seasoned pros alike, the hydroflyer’s speed settings range from mild to wild. its silent, electric motor is powered by a supercharged lithium-ion battery that lasts for two hours at the top speed of 55 kph (34 mph). riders can adjust the speed using the wireless controller built into the handlebars. the controller feeds signal to the onboard computer to power on the silent motor built into the waterproof mast. once the rider reaches a speed of around 4 knots, the power of lift and thrust begins to work its magic and the foil comes out of the water.

‘That’s when it feels like flying. there truly is no feeling in the world quite like it. it’s 100% environmentally friendly, no gas, no fumes, no wake, no noise, and requires no towing or trailers. the hydroflyer has solved many of the issues facing the traditional watercraft such as a boat or jet ski,’ says mcarthur.

‘We are excited after so many years of R&D to finally bring the hydroflyer to market,’ comments matthew o’rourke, unifoil’s global sales manager. ‘with the addition of our patent-pending detachable handlebars, stabilized board, and safety foil features, we have reduced the eFoil learning curve from several days, down to under 15 minutes. it’s a game-changer, but we are not done yet. in the coming months, we will be releasing more board and wing models to suit riders of all sizes and skill levels.’ 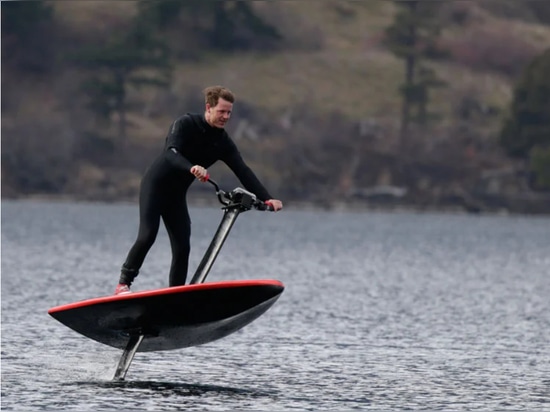 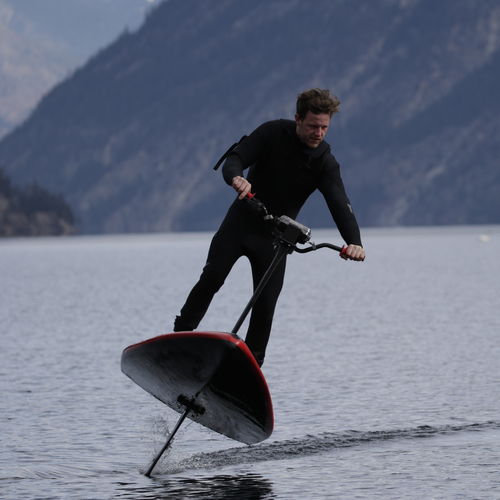