Developed by Vinssen, the hydrogen vessel is powered by an electric drivetrain and sub-system provided by Finland-based electronics manufacturer Danfoss Editron.

The Hydrogenia is 32.8ft long, has a maximum capacity of six people and is capable of being operated at 10 knots for six hours.

The vessels unique design is based on a geometric shape that, as Danfoss states, reflects the beauty of glaciers and rocks.

It has undergone testing and demonstration at the Ulsan Hydrogen Realisation Centre, South Korea’s only demonstration facility that is specifically specialised in hydrogen piping supply and has also been presented to the nation’s leader President Moon.

Vinssen is planning to construct a further 50 boats using similar hydrogen electric technology over the next year with the successful application of the Danfoss multiple-parallel inverters in a single machine used as a benchmark to deliver larger marine projects.

Chil Han Lee, CEO of Vinssen, said, “President Moon was extremely interested in the commercialisation of the Hydrogenia vessel.

“If the government’s institutional and policy support for the commercialisation of hydrogen electric boats continues, it will enable South Korea to lead the world in hydrogen ship technology that will grow into a high value-added industry.”

Steve Kim, Head of Northeast Asia at Danfoss Editron, said, “The unveiling of the Hydrogenia boat demonstrates the pivotal role we play in marine electrification, both in hydrogen and battery-powered vessels.

“We will continue to help South Korea achieve its goal of being carbon neutral by 2050 by contributing to the ongoing electrification of the country’s transportation industry, with a focus on its shipbuilding sector.

“Our multi-function inverter modules can be easily integrated with other energy sources, such as hydrogen fuel cells, without additional costs for research and development. 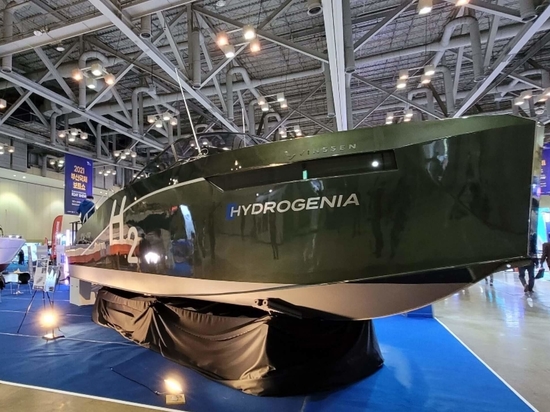