Disclosure: I’m a fallen-away California surfer with chops from Steamer Lane to K69 in Mexico, and I used to pity those who lived far from an ocean because they could never surf—wrong!

With the new Cobalt R8 Surf, you can surf any lake, river or large puddle. Even better, you can create perfect curls to your taste.

Sure, you can also use the boat for family outings, water-skiing and whatever else. But Cobalt drew from Malibu, its corporate owner, to create an amazing wave-maker. You can load a water-ski boat with people and water-ballast bladders, but it can’t dial in a wave at the touch of a button like the R8 Surf.

This is one rad-looking boat, from the huge speakers hanging on the tower like engines on a 747, to the racks on each side for a quiver of boards, to wild colors such as the Knock-Out Red on our review boat. You can tailor the colors in six areas, from the upper and lower hull, the boot stripe and bottom, and even to the Surf Gate.

This nearly 28-footer takes full advantage of its trailerable 8 ½-foot beam to maximize the inside space and, because it is NMMA Yacht Certified, you can plant someone in every seat, which means up to five in the bow, three at the helm and companion seat, as many as eight in the cockpit, and three more on the flip-up rumble seat aft.

The helm is a masterpiece of ergonomics, with twin Garmin 7- or 10-inch screens for navigation and engine instruments. Use one monitor with a rearview camera to watch the surfer without having to turn around. Opposite the helm is a surprisingly civilized enclosed head with 50 inches of headroom, a necessity for all-day outings.

The tower on our test boat was the available Prisma folding version (nonfolding is standard) equipped with a slide-out shade over the aft cockpit, pockets for lines (the tow ring is above the top), and sleeves for more boards on top. The wide transom platform has the patented Cobalt flip-down “beach” to make water access easy. Oh, there’s a head with a portable toilet in the portside console, as Chaparral Boats includes in its 26 Surf ($146,666, powered like our test boat). The Chaparral is 17 inches shorter than the Cobalt and carries 15 gallons less fuel.

OK, OK, enough about the boat. Let’s talk waves because the only reason you’ll buy the R8 Surf over the standard R8 is to create some great curls.

You’ve entered the world of push-button wakesurfing. We had Sam Langley, a championship ripper, aboard to show us what can be done with the R8 Surf, and the first thing he did after loading the tower racks with his choice of boards was to dial in the boat.

He started at the Zero-Off dash panel, which sets and controls boat speed precisely using GPS. For Langley, that was 11.3 mph. Then he dialed in the Surf Gate trim at 3, which is what he preferred for his demonstration. Choose 5 and riders will say, “Over my head!” And at 7, it’s “Oh, wow, awesome!”

While he did this, Alex Barry, a longtime Cobalt team member, punched the fill buttons on the Garmin screen, pumping 2,300 pounds of water into the six hard tanks under the sole. These fill (and empty) in just seven minutes, and Cobalt carefully placed them over the center of gravity to eliminate bow rise, which can block the skipper’s vision.

Tanks full? Numbers dialed in? Surfer in the water? Now all the skipper has to do is push the throttles forward and the R8 Surf takes care of the rest. Besides the ballast, the key to the size and shape of the curl is the Surf Gate, a Malibu Boats innovation that is like a trim tab that hinges out from the side of the stern.

The skipper can choose whether the wave is right or left, for the surfer’s preference. Are you a goofy-footed rider (right front forward)? It’s no matter because another touch on the Garmin screen switches the Surf Gate side quickly, allowing the surfer to go up and over the wake to find a new wave waiting on the other side.

One item I haven’t mentioned is power for the R8 Surf, which is a 380 hp Volvo Penta 380 CE Duoprop Forward Drive (FWD). This is the middle choice at 380 hp between the standard 350 hp and the top 430 hp, and it proved great for surf use.

With the props forward of the lower unit, this drive’s Duoprop contra-rotating propset pulls rather than pushes. It tucks the props safely under the boat, which is especially important because surfers rip almost to the transom. The FWD also gives great leverage so the skipper can add or subtract trim to meet the conditions.

Langley surfed on a 52-inch Key Board Phase 5, a Sean Silveira design for pro riders, and, oh man, was he smooth.

The R8 Surf’s wake has a clean wave face of at least 20 feet, it allowed Langley to carve, cut back and bottom-turn from the transom well into the foam. Even more important, Langley reported the push, or energy, of the wave as powerful, and I could see that from the helm.

The R8 Surf is a great boat, with a top speed of nearly 48 mph. And with its 21-degree transom deadrise, it will carve through the afternoon chop better than boats with flatter bottoms.

Looking for a boat that throws a great surf wake and retains several key attributes of a bowrider? Test-ride this Cobalt R8 Surf.

Amazing stowage under the sole (5-foot skis are no problem), under every seat, and in cubbyholes, all gelcoat-finished for easy cleaning.

Hinges on lockers and even the engine hatch are oversize and sturdy, and many have gas assists for safety.

Deep gutters with rubber seals keep water out of lockers as well as knock down engine noise.

Volvo Penta Forward Drive doesn’t swing up as far as a conventional sterndrive, so you need to be careful of your props around sandbars and with trailers.

Grab rails for anyone on the rumble seat aft would be appreciated.

An opening port in the head, as found aboard comparable boats, would be welcome for natural light and ventilation. 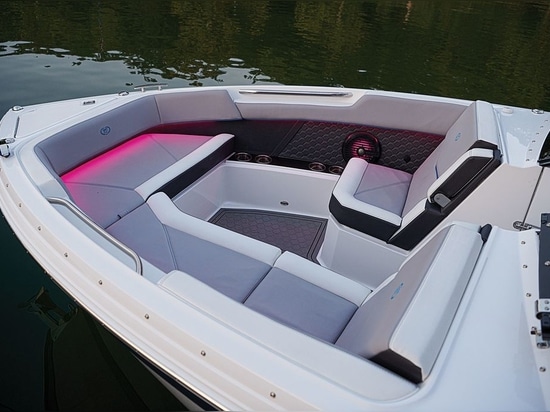 Bow seating is plush and spacious. 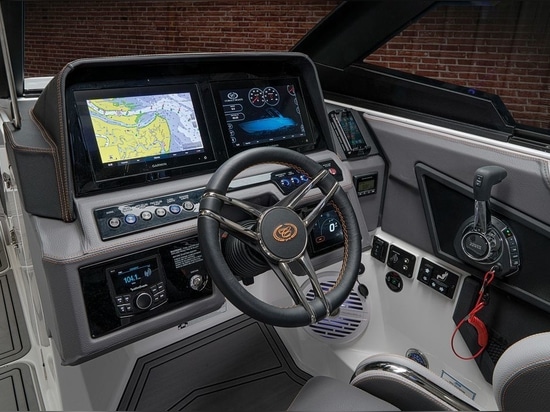 The Zero-Off dash panel makes it easy to customize wakes and waves. 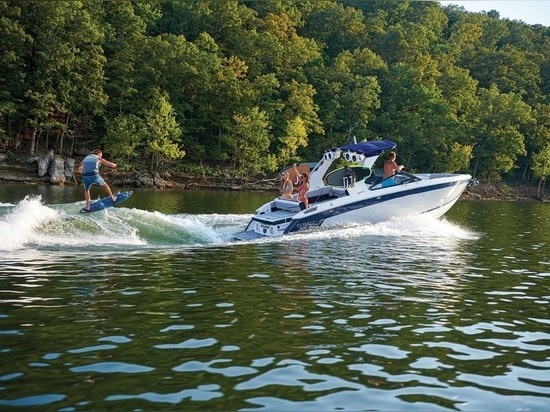 The R8 Surf is an amazing wave-maker. 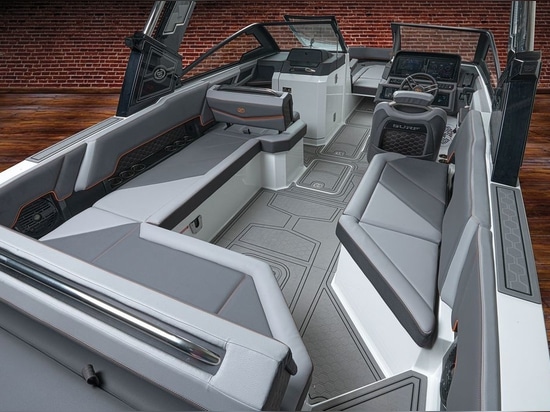 The cockpit offers comfortable seating and loads of storage. 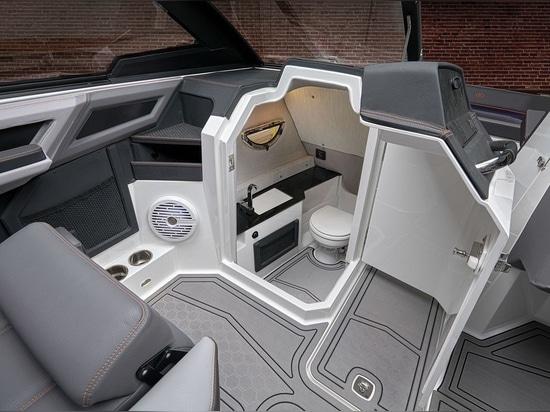