A company that has developed a new method for measuring and monitoring water parameters and especially low values of hydrogen sulphide (H₂S) in on-land fish farms and tanks in wellboats has today won the prestigious Innovation Award at the world’s biggest aquaculture trade event, Aqua Nor.

The award went to Searas AS for its SeaRAS Aquasense system that can measure H₂S in water continuously.

“We are the only ones who know [how to do] this and the system is patented,” Searas general manager Eldar Lien told Fish Farming Expert’s Norwegian sister site, Kyst.no.

Lien believes that the ability to measure the toxic gas down to 0.05 micrograms/litre will provide completely new knowledge.

“We have measured and found H₂S not only in RAS facilities that use seawater, but in wellboats and in hatcheries that use fresh water,” he said.

Fish can die in seconds if the levels get too high. But sublethal levels can and do also have effects.

“The fish get poorer welfare and grow less well. But when we can measure it, we can learn more about both the effects of H₂S and how we can avoid it. We can design the facilities better, and have alarms when the levels get too high,” Lien explained.

The sensors have been developed in conjunction with salmon farmer Mowi in a project supported by Innovation Norway.

As well as sensors, Searas develops very innovative recirculating aquaculture systems (RAS), and this business is also in full swing.

“There are now seven of us in the company. Together with Leirvik AS in Stord, we can deliver complete RAS facilities,” said Lien.

Searas was one of three companies shortlisted from 21 entries for the Innovation Award, which comes with a NOK 100,000 cash prize and is run by the Nor-Fishing Foundation which organises Aqua Nor, the biennial event which started today in Trondheim.

VAKI was shortlisted for the Density Control component of its SmartFlow system. The Density Control solution maintains a consistent and pre-set ratio of live fish and water during the fish handling process. The regulator thins out the flow if the volume of fish in the hose surpasses a certain density.

Noras Global SA has developed a unique self-powered lifebuoy – U-Safe - that is remotely controlled by a joystick to quickly reach a person in danger. The person holds on to the buoy and can be brought to safety. The buoy has two effective turbine motors and is symmetrical, to ensure it works efficiently regardless of how it lands in the sea.

The previous two Innovation Awards both went to UK companies.

Dundee-based Ace Aquatec won in 2017 for its Humane Stunner Universal, an in-water stunner that renders fish unconscious before slaughter.

The 2019 award went to Benchmark Animal Health for its CleanTreat water filtration system, designed for use with its new Ectosan Vet lice treatment. CleanTreat removes all traces of Ecotsan, along with lice, egg strings and other contaminants, from wellboat treatment water. Ectosan Vet was recently approved by Norwegian authorities and is now being used for lice control there. 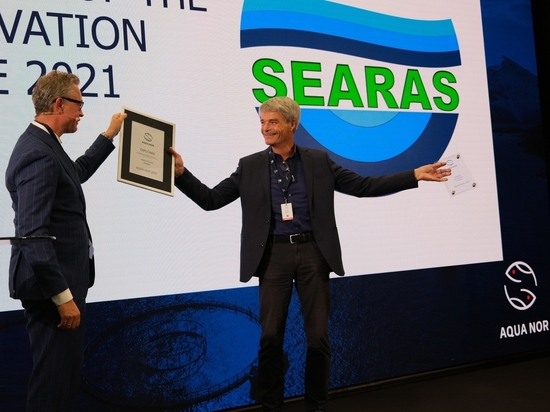