The Swedish tech company Candela has racked up more than 60 orders for its revolutionary, 290 000-euro electric boat, the Candela C-8. That makes the flying C-8 one of the fastest-selling 28-foot boats on the market.

The Candela C-8 is the next-generation electric boat from the Swedish tech firm Candela. Using a new version of the company’s patented hydrofoil system, C-8 flies above the waves with greater range than any other electric boat, powered by a new, silent pod thruster – the Candela C-POD.

Compared to the company’s first model, the smaller and hand-built C-7, the C-8 is made for rapid mass production which allows Candela to sell it for a price that is in line with conventional premium, fossil-fuel boats.

Five weeks after launching the C-8, Candela has more than 60 orders for it, which makes the novel electric powerboat one of the best-selling 28-foot premium boats in Europe.

- According to our data, the C-8 is the second or third fastest-selling powerboat in the 28-foot category in Scandinavia. Not just electric boats, but any type of power source. By year's end, we expect to have a real impact on combustion engine boat sales in this size category, says Mikael Mahlberg, Candela’s Communications Manager.

Candela’s first boat – the open Candela C-7 – was a sales success in its own right, but still a niche product. With 30 units delivered since production started in 2019, C-7 led premium electric boat sales in Europe on account of having longer range, higher cruise speed and smoother ride than other electric boats, thanks to the company’s hydrofoil tech that lifts the hull above the water friction and allows for long range on battery power only.

Candela C-8 is a far bigger and more capable boat that will offer new features not found in other boats. Flying on computer-controlled hydrofoils that lift the hull above the waves and reduce energy consumption by 80% compared to traditional powerboats, the C-8 can cruise for more than 2,5 hours at 20 knots. The hydrofoils also reduce slamming by 90% compared to conventional hull boats.

- The C-8 will not just have longer range than other electric boats, it will offer a better ride experience than any boat out there. In 3-4-foot chop, you’ll be able to drive at 30 knots without feeling the waves. It will be like a magic carpet ride, says Mikael Mahlberg.

The real game-changer is Candela’s new boat motor - the Candela C-POD. By putting the electric motors in a torpedo-shaped pod under the water, Candela gets rid of mechanical gears and the associated noise. Shifting to electric direct-drive also reduces the number of moving parts, making the Candela C-POD more efficient, and virtually maintenance-free. With 3 000 hours between overhauls, the Candela C-POD will last a human lifetime without maintenance.

- The C-8 will be the first truly silent, fast motorboat. There’s no slamming, no noise from the transmission. You’ll be able to cruise along at 24 knots, with only the sounds of wind whistling past the windscreen, says Mikael Mahlberg.

All software and most hardware – including the Candela C-POD motor and Flight controller that controls the foils in-flight - are designed in-house. Candela C-8 is a fully integrated boat, offering a seamless user experience. Gone are the myriads of physical buttons and knobs found in conventional boats. All features, from foil retraction to route planning, are managed by the 15,4-inch panoramic touch screen, which is running Candela’s intuitive User Interface. Boaters can also manage and monitor charging, route planning, heating etc from the Candela app.

Thanks to the hydrofoils – two underwater wings – that lift the hull above the water friction, Candela C-8 can run for considerably longer distances than other electric, fast boats. At a cruise speed of 22 knots, the C-8 will cover more than 50 nautical miles (92 km) on one charge of its 45-kWh battery.

When foilborne, the C-8’s on-board computer, called the Flight Controller, adjusts and twists the hydrofoil about 100 times per second to maintain the best flight height and to counteract waves and side wind. This allows for an artificially stable ride, free from the slamming and pitching common in conventional motor boats.

In very rough seas that prevent hydrofoiling, the C-8 can also be driven as a conventional boat, albeit with reduced range. By pushing a button on the touch screen, the hydrofoils will retract into the hull. This feature is also useful when entering a shallow harbor, or when storing the boat on a trailer. When driving in Shallow Mode, the C-POD motor and C-Foil are retracted and fully protected from both fouling and hitting submerged objects.

The first Candela C-8 boat is being assembled in Candela’s Lidingö, Stockholm factory during December. First deliveries will start during spring 2022. 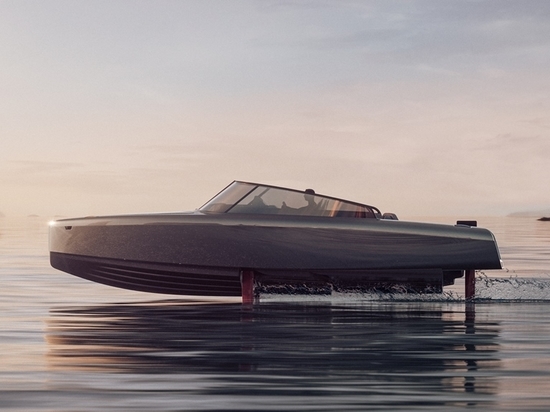 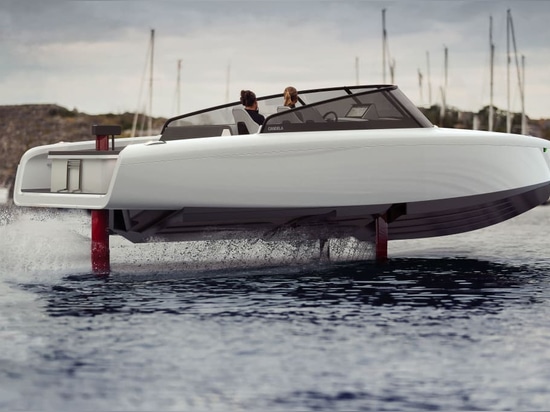 Candela C-8 flies on computer-guided hydrofoils. With a top speed of 30 knots and a cruise speed of 24 knots, it rivals fossil fuel powerboats in terms of performance while offering a whisper quiet ride and far better comfort. 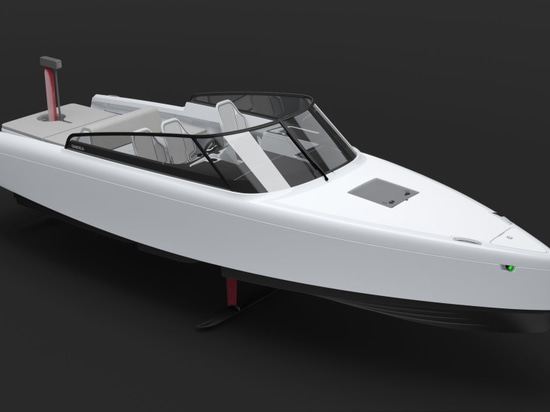 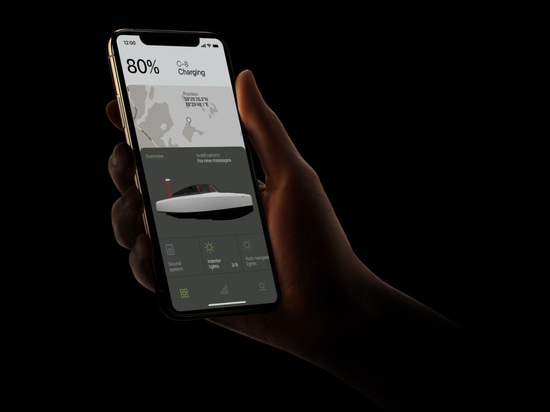 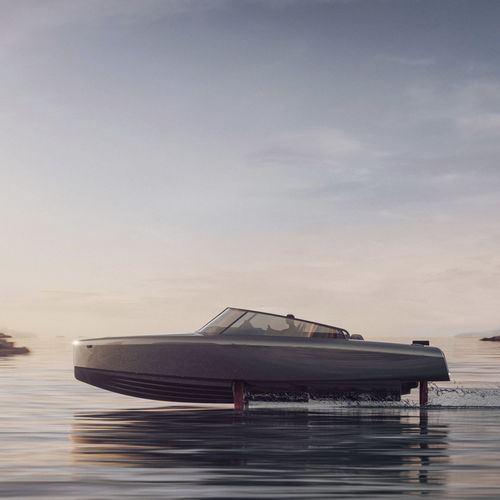