A Glimpse Into the Future

When Navico unveiled its Simrad NSX series at the Miami International Boat Show in February, the announcement flew a bit under the radar, since it was about an entry-level platform.

But because that platform incorporates Neon, a new Android-based operating system, this NSX series is worth learning more about. Simrad is offering a sneak peek into technology that will eventually control all Simrad multifunction displays, and that will allow them to be updated daily so they have less chance of becoming obsolete. Given that Brunswick Corp. owns Navico, the NSX series possibilities — in the context of Brunswick’s ACES strategy for autonomy, connectivity, electrification and shared access — are extensive.

Most displays become obsolete as soon as they are unboxed. The fundamental game-changing feature that Neon allows within the NSX platform is giving devices the ability to get better over time.

“We spent 15 years building the previous Linux-based NavicoOS system, building everything from scratch, and had one big software stack that was serving more and more products,” says Knut Frostad, CEO of Navico, whose brands include Simrad, B&G, Lowrance and C-MAP. “But every time you want to make a change to it, you’re indirectly influencing another 150 products, so it’s a slow process.”

NavicoOS-based systems are updated about every quarter, but with Neon-based multifuction displays, software updates can be made daily, if needed. And because of the new system’s modularity, updates are closer to a megabyte in size instead of a gigabyte. The updates can be handled by using a direct Wi-Fi connection; by download from the Simrad website to an SD card; or by connecting the multifunction display to a smart device.

“We want to take the feedback we get from the NSX and use it to guide our efforts for the development of more advanced products,” says Simrad Yachting executive vice president Mike Fargo.

NSX is expected, eventually, to supplant the GO series as Simrad’s entry-level platform. For now, NSX is still in early mode, which allowed Simrad to get it out to consumers this year. “When you’re contemplating the change to a new OS, it’s important to get the basics right,” Thomas says. “NSX doesn’t have some of the networking capabilities and features we’ll be supporting later, like ForwardScan, SiriusXM Weather, FLIR camera compatibility, along with the ability to interface with trolling motors. But by keeping to the basics, we could bring a consumer-ready platform to market faster.”

The NSX has a no-button touchscreen and is available with 7-, 9- and 12-inch displays. The SolarMax screen is an upgrade from the one on GO series models and is the same as higher-end models, such as the NSS evo3.

Setup wizards guide users through device setup. A customizable activities bar allows for rapid access to any device or function. Drag-and-drop makes it easy to populate the screen. The NSX also has Simrad’s fastest-ever autorouting, and syncs waypoints and routes with the cloud for an automatic backup.

Today’s boaters don’t want a learning curve with their helm electronics. They want a simple experience that facilitates not-so-simple features.

To this generation of boaters, an Android operating system makes sense. It allows a multiscreen experience and is smartphone-compatible with the Simrad App. Android also helps the multifunction display’s ability to interface with third-party apps.

“At Navico, we’ve got a couple of hundred engineers, and it would be unusual to have one of them who hasn’t touched this project,” Fargo says.

“Stephen’s directive to us was to make sure we put it in front of people that aren’t chart plotter experts,” Fargo says. “So we gave it to our spouses, and I even gave it to my daughter, who’s definitely not a navigator. The endgame was to create a product so intuitive that it doesn’t need any manuals.”

Fargo says Frostad has been deeply involved in the project. “Because of his extensive on-water experience, he was quite involved in the validation phase where we were out in the field testing it — ‘in anger,’ as we say. It’s on the water where you get a different take on something that you hadn’t thought of before at a desk or in the lab.”

A new, more powerful processor was necessary to achieve the performance goals. In addition to allowing near- instantaneous screen redraws and zooms, it ended up having an unexpected benefit: Because the processors are new-generation, they were less likely to be scarce within the supply chain.

Those who rely on designs that are a few years old compete with a larger number of companies that also use established technology. In this case, Simrad was able to sidestep that pileup.

Simrad also launched a new charting platform called C-MAP Discover X and Reveal X. This X generation of charts is based on Mapbox, which is a library for embedding highly customized maps within Android applications. The charts include C-MAP navigation capabilities and are compatible with sonar, radar and autopilot.

The Simrad app can turn a smartphone into a navigation device. And the maps are the same as the ones on the multifunction display, so there’s no learning curve when moving from one platform to the next.

The NSX’s operating system should pilot Navico’s products well into the future, with built-in upgradability through over-the-air software updates and a user interface and new charting that should make the products that follow it a pleasure to use. 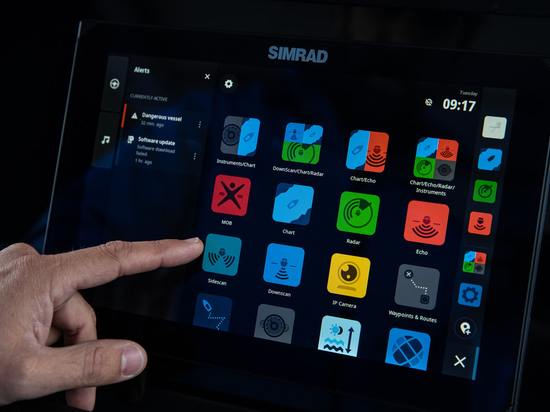 The icon-based touchscreen is similar to mobile devices, making it easier to use for a larger group of consumers. 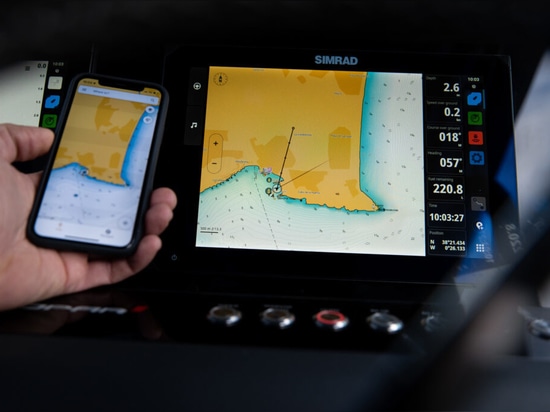