Prepare for liftoff from the ultimate launch pad.

When introduced in 2006, Malibu’s Wakesetter 247 supersized the ­market. It was big in terms of length and also passenger capacity. With its 1,450 pounds of potential ballast and Malibu’s proprietary Power Wedge wake-shaper, it also produced awesome wakes. The 2022 Wakesetter 25 LSV ­carries on that tradition. At 25 feet, it remains big, now with an 18-passenger capacity. It also offers the third-generation Power Wedge and adds Malibu’s Surf Gate technology to dish up endless waves for the surf crowd. The biggest influence on wake size, however, will always be ballast. Here, compared to the original 247, the 25 LSV offers 250 percent more capacity. That’s not just supersizing. That’s super-duper-sizing.

Because it’s designed to displace more water, Malibu’s WakePlus hull naturally boosts wake size, but it’s the 3,680 pounds of potential ballast that really pumps up the volume. Distributed between a pair of molded, L-shaped tanks at the stern and a central tank between helm and port console, it adds 2,380 pounds below the floor, keeping the center of gravity low without eating up ­storage space. Flexible ballast bags, plumbed to easily fill and drain in plug-and-play fashion, can be added in stern storage compartments for another 1,300 pounds.

Malibu’s Power Wedge III continues to fine-tune that ballast-boosted wave while mimicking up to an additional 1,500 pounds. The hydrofoil-type wedge adjusts to multiple angles, pulling the boat’s stern deeper into the water as it arcs downward to further boost wake size and produce a ramplike shape with exceptional pop. As it approaches vertical, the wave lengthens and mellows, but retain its considerable mass. In this way, it mimics the old-school moving of ballast fore or aft, while giving the LSV the equivalent of over 5,000 pounds of ballast for those seeking a pro-level riding experience.

To create ideal surf waves, add the ­optional Surf Gate, a pair of vertical tabs located at transom corners that individually deploy outward to delay the convergence point of water coming off each side of the hull. Surf Gate builds and shapes a near-ideal surf wave on a rider’s preferred side. Surf Gate’s fast action also allows experienced riders to cross over and surf the opposite wake without missing a beat.

Our test boat’s standard 430 hp ­Malibu Monsoon M6Di benefited from 460 foot-pounds of torque to push the LSV’s substantial weight through the water and power riders from a deepwater start with surprising ease. Should you want more, the optional LT4 pushes those figures to 607 hp and 606 foot-pounds. While conventional wisdom suggests that any wake-sports boat chugs fuel, the M6Di ­consumed between 6 to 8 gph at surf speeds and around 10 gph at wakeboarding speeds in our testing.

As to the passenger experience, the 25 LSV offers a luxurious interior feel, with the appropriate focus on the action taking place in its wake. Seating follows a traditional layout, with a familiar bow ­cockpit, an ergonomic helm seat, and a perimeter bench wrapping most of the main cockpit. However, numerous features stand out. A pop-up cushion in the port bench creates an aft-facing backrest that mirrors the adjacent seat to starboard. Malibu’s Multi-View bench seat offers forward-facing seating against the engine compartment or slides into the cockpit using its flip-over backrest to focus occupants’ attention behind. That same seatback can pivot 90 degrees to fashion a snack table. Transom seats are handy when gearing up to ride, or easily transition into recliners when hanging out in the cove. The optional Natalie seat in the bow, named for the engineer’s wife who suggested it, adds a seatback in the windshield walk-through while doing double-duty to block wind. Plenty of storage is offered below the seat bottoms, ­behind the starboard bench’s seatback, and within the consoles.

MasterCraft’s XT25 ($163,000 well-equipped) likewise delivers impressive wakes and surf waves, with a traditionally shaped bow, 18-passenger capacity and luxurious feel. Both models are evidence of just how far the market has evolved—and how far ­supersizing has progressed.

. Large rotary dial and tactile buttons allow for easy adjustment of wake settings and stereo volume while keeping your eyes on the water.

. Optional flip-down steps allow crew to board or disembark without stepping on the vinyl.

. Bow is playpen-style only, meaning crew sit with legs up rather than feet on the floor.

. Competitive models incorporate a dedicated anchor locker at the bow. 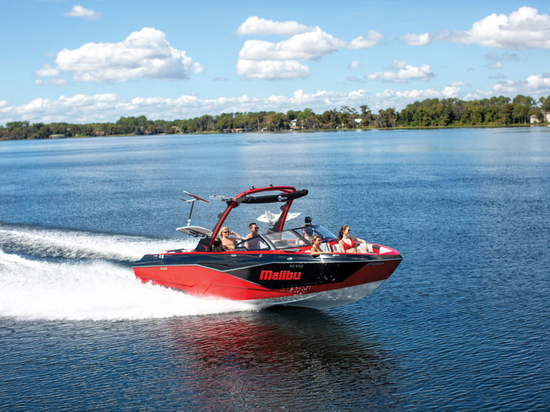 With room for 18, the Wakesetter 25 LSV can take everyone surfing. 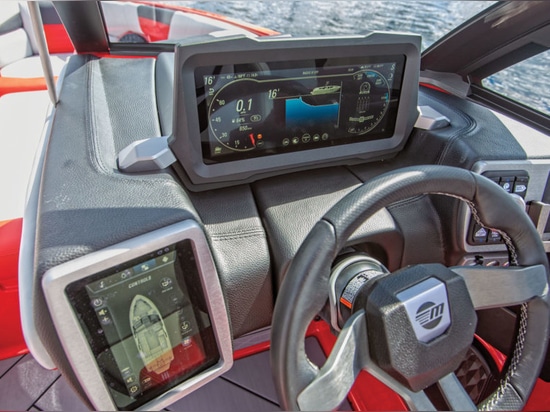 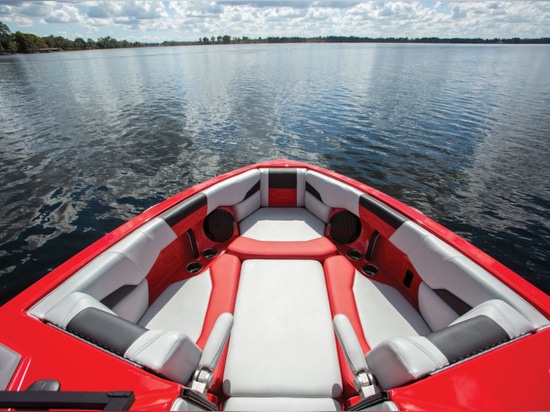 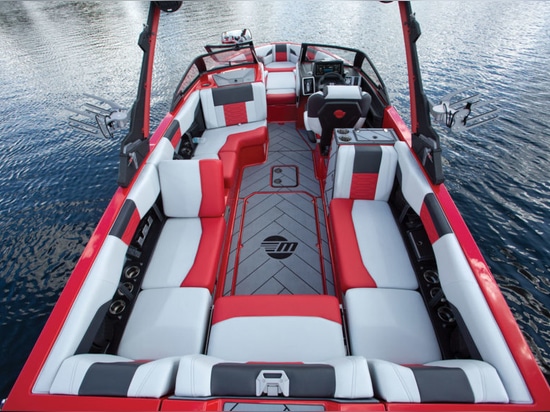