Ensuring connection from anywhere with Intellian

Concerns around hiring and retaining employees was among the major themes in conversations and panel discussions at the 2022 International WorkBoat Show held in New Orleans recently.

Worker shortages continue to plague the commercial marine industry. While most agree there is not a single, catch-all solution to the problem, there are some helpful ways to improve hiring and retention.

One is aimed at addressing the requirement that mariners and others must spend significant amounts of time away from their homes and families, and reducing that isolation effect to the as much as possible. There are different ways to do that, but one of the most important is to provide the best and most reliable connectivity to land for communications and things like broadband and television. Of course, this connectivity also plays important safety and commercial roles as well.

Intellian was one of the companies at the 2022 WorkBoat Show that was showing off their connectivity tools at their booth. Nicolas Broderick, an Intellian sales executive with years of experience working with satellite communications, took a few minutes to speak with WorkBoat.com at the show to explain how the company’s products are helping keep vessels in all industries connected.

Broderick emphasized two areas in which Intellian is separating themselves from other satellite communication companies in the market: The breadth of the company’s product suite and the speed of development for the organization. To the former point, the company offers communication and TV satellites of varying sizes to accommodate any boats and industries that may be looking for these solutions, and they continue to push out new products. Earlier this year, Intellian released two FleetBroadband terminals, which can be used on the Inmarsat FleetBroadband network, with a third set to be released in the first quarter of next year to complete the product line.

Broderick highlighted new antennas released by the company that are electronically switchable. In other words, users are able to easily switch from Ku-band to Ka-band – offering different ranges of frequencies – with the push of a button rather than having to physically modify anything on the antenna. These are just a couple of the examples Broderick presented to show how quickly Intellian adapts, an important quality in a field like satellite communications that moves so rapidly.

The wide range of products offered by Intellian – varying in size and capabilities – also allows them to service a variety of industries within the commercial marine market as well. Brodkerick points to the cruise industry as one of the company’s biggest presences, noting that a large number of cruise vessels use their platform model, the MT 240s. In addition, he said the military is a large market for Intellian, as well as tugboats, oil rigs and other commercial vessels. 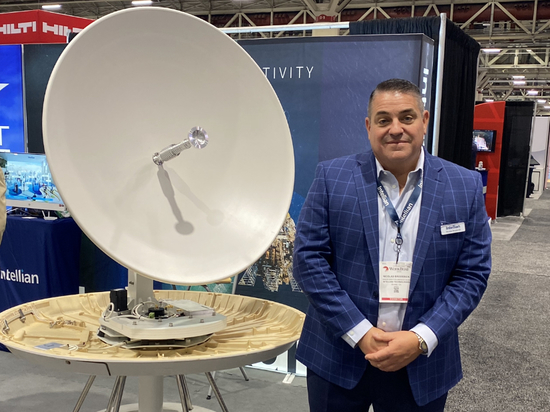