The biggest superyacht launches of 2022

Of the 350 new launches that splashed this year, we revisit the largest superyachts to join the world's fleet on the water in the past 12 months, starting with Lürssen's 158 metre Blue...

In addition to being named this year's most sizeable delivery, Blue now ranks as the fifth largest yacht in the world in terms of LOA. She joins 22 other yachts built by Lürssen to pass the 100 metre threshold, with the German shipyard also having developed Blue's naval architecture. Terence Disdale designed both the interior and exterior which includes a helipad at either end of the vessel, a swimming platform connected to a beach club and room for 48 guests with an additional 80 crew. Blue is also one of the largest yachts to be equipped with diesel-electric hybrid propulsion and features an innovative wastewater treatment system.

While details remain sparse, Opera is believed to be the reincarnation of 145 metre Project Sassi, which had been destroyed in a 2018 shipyard fire at Lürssen's Bremen yard. The original hull is rumoured to have been recovered for the new build, although the aluminium superstructure needed to be scrapped. The yacht was launched in September of this year and has since been spotted out on sea trials in the North Sea. Terence Disdale is responsible for both the exterior and interior design, which can be seen to feature a pair of helipads on the foredeck and upper deck aft and two swimming pools. The yacht is currently one of eight 100m+ vessels in build at Lürssen.

Formerly Project Y721, the much anticipated Koru is reportedly being delivered to Jeff Bezos as the world's largest sailing yacht, stealing the top spot from the 109.5 metre Sea Cloud. And the record breaking vessel doesn't stop there. Koru is the longest yacht to have been built in the Netherlands and the largest ever by shipyard Oceanco, eclipsing its current flagship Black Pearl by more than 20 metres in length. Little else is known about the elusive project, including her design team and onboard amenities. However, the new yacht is expected to be delivered in 2023 and will be accompanied by a support vessel rumoured to be in build at Damen Yachting.

Feadship 1010 became Feadship's longest launch to date in August 2022 and supersedes the 110 metre Anna which was delivered in 2018. The yacht's midnight blue exteriors are the work of Espen Øino while French studio Zuretti handled the interior, which still remains under wraps. Seen in action on sea trials earlier this year, the new flagship appears to house a swimming pool on the main deck and a large helipad equipped with a hangar on the upper deck. Feadship 1010 is expected to be delivered imminently.

One of the more recent launches, Abeking & Rasmussen's hull 6507 was rolled out of the sheds at the Lemwerder shipyard in December 2022. At 118 metres, the new build beats the yard's former flagship, the 98.4 metre Aviva, by nearly 20 metres in length. Both the exterior and interior designs were completed by French architect Joseph Dirand, whose previous work includes a 24 metre Otam, and features a large swimming pool on the aft deck, a helicopter pad and an underwater Neptune lounge shared by the shipyard's award-winning superyacht M'Brace (ex Elandess). On delivery, the yacht will officially be the largest motor yacht ever to be built by the German shipyard, although she will eventually be dethroned by a secretive 120m+ project commissioned in 2021.

The second Ocean to make this list, Oceanco Y720 has been designed inside and out by neighbouring Dutch studio Sinot Yacht Architecture and Design. The yacht is the first Oceanco to be constructed at the builder's new Zwijndrecht shipyard and features extensive glasswork along the three deckhouses on the main, bridge and upper decks. Meanwhile, Lateral Naval Architects completed the naval architecture and fitted the vessel with advanced propulsion systems that reportedly exceed current environmental regulations. Oceanco Y720 is expected for delivery soon and was last spotted out on sea trials in the North Sea in August.

Details surrounding Project Icecap have been kept tightly under wraps since news broke that the yacht had been sold in 2018. From what has been gathered, the Lürssen project had her naval architecture developed in-house while her exterior styling was penned by Salt Ship Design. As her name suggests, she is thought to have been designed with high-latitude cruising in mind, with a helipad and reverse bow. Elsewhere, the vessel will reportedly feature a fold-out beach club, three fixed terraces built into the stacked forward superstructure and accommodate up to 20 guests in half as many cabins.

Delivered in August this year, Project X was aptly named for its defining triple-X design down the waist of the boat's superstructure, courtesy of exterior designer Ken Freivokh. Project X made its debut at this year's Monaco Yacht Show, where onlookers were able to view onboard features including a three-deck atrium connected by a circular glass elevator, an aft deck pool and a private office/conference room spanning the width of the vessel's 14.8 metre beam. She can accommodate up to 14 guests and is currently available for charter with Burgess from $1,100,000 per week. The yacht also features the naval architecture of Marco Yachts and interior design by Studio Massari.

Built under the codename Project Globalfast, the explorer was started on speculation, sold to an owner in April, and now joins sistership BOLD as the second in a series of all-aluminium Silver World Explorers by SilverYachts. Like her sistership, her utilitarian exteriors are the work of Espen Øino International, defined by a band of darkened glass on the upper deck and an open aft deck for storing toys or a helicopter. Øino's "highly efficient" hull design allows Wanderlust to reach a top speed of 23 knots with a range of 5,800 nautical miles, allowing for longer trips at sea without the need to refuel in between. Other onboard features include accommodation for 16 guests and 23 crew and a hidden helicopter hangar that doubles as a gym or disco when not in use. Wanderlust is currently available for charter with Burgess from €896,000 per week.

The red-hulled Bilgin 263/02 is the second in a series of three to hit the water and follows on from sistership Tatiana, which was delivered in early 2021. The third and final 263 model was also sold and is scheduled for delivery in March 2023. Each of the vessels share the same slender profile created by Unique Yacht Design and interiors by British studio H2 Yacht Design. Bilgin 263/02 features a reduced number of accommodations than her predecessor, opting instead to provide additional space for fewer cabins. Accompanying the beach club pool are multiple Greek statues sitting on water outlets with integrated lighting, as well as fibre optic lights placed overhead to give the appearance of the night sky. 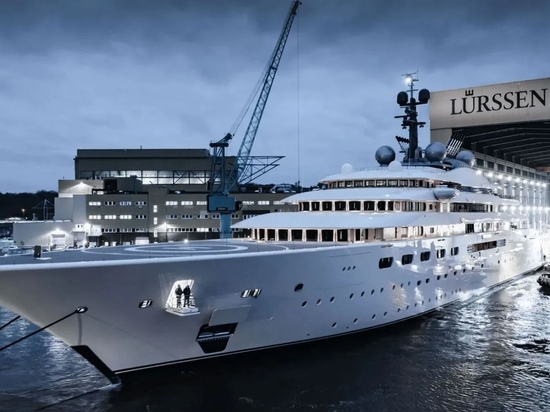 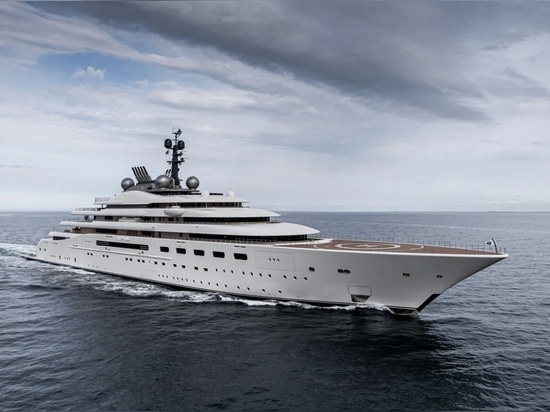 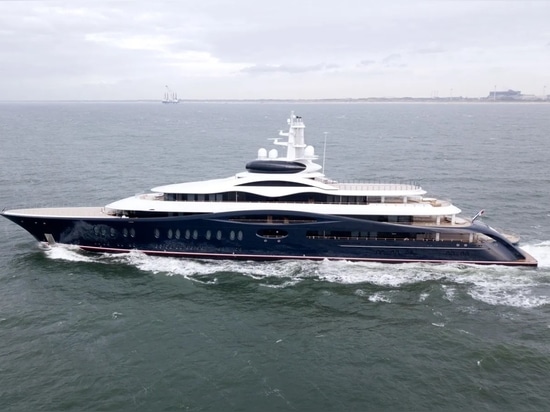 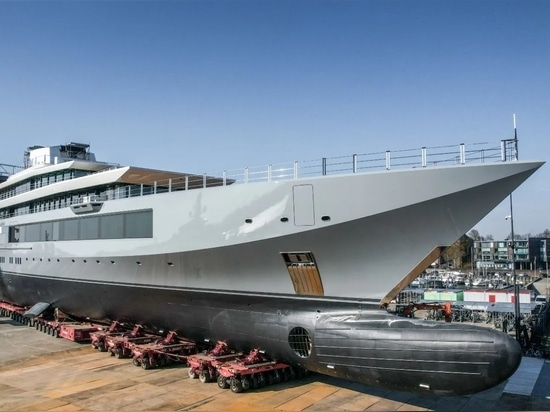 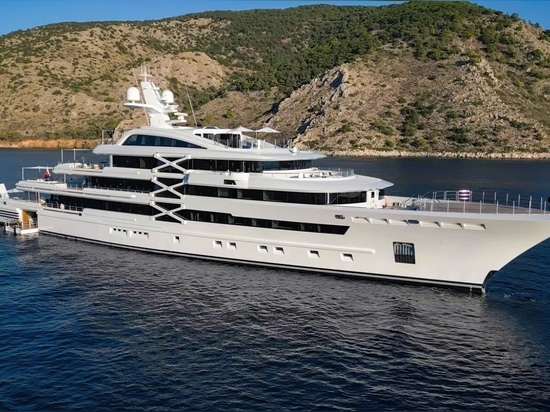 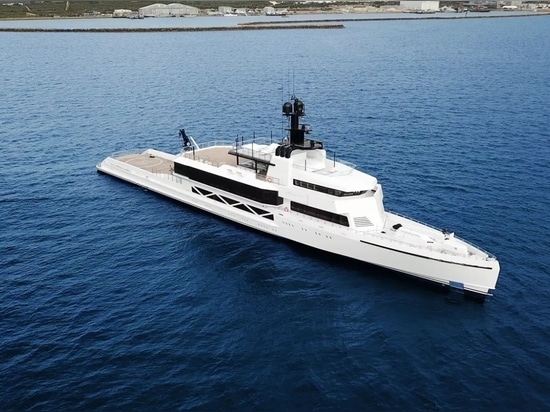 Wanderlust
*Prices are pre-tax. They exclude delivery charges and customs duties and do not include additional charges for installation or activation options. Prices are indicative only and may vary by country, with changes to the cost of raw materials and exchange rates.
Compare
Remove all
Compare up to 10 products