The J/109 North American Championship will be the talk of the tent. They’ve got the numbers and the rivalries to fuel the rum karate.

Bill Sweetser has enjoyed tremendous success racing his J/109 Rush, winning Key West Race Week and earning Boat of the Week honors at the Larchmont NOOD, among many impressive accomplishments. However, one coveted victory has somehow eluded the Annapolis skipper: the J/109 North American title. Rush has been in contention on many occasions, but for one reason or another has always fallen short.

“It’s been a disappointing regatta for our program over the years and I really can’t put my finger on why. It just seems like it’s always something,” says Sweetser. “Maybe it’s a jinx. It would be nice to finally check the North Americans off our list.”

One of Sweetser’s all-time favorite regattas is Block Island Race Week, which was the site of arguably his greatest achievement. In 2011, Sweetster’s Rush won its 15-boat class as the J/109 East Coast Championship was held in conjunction with Race Week.

It was a resounding victory as Rush not only secured the title for the second straight year, but was also presented the A. Justin Wasley Memorial Trophy (overall winner of the largest one-design class), the Storm Trysail Club Block Island Race Week XXIV Trophy (overall first place in White fleet) and the Everett B. Morris Memorial Performance Trophy (presented at the discretion of the race committee for exemplary performance).

“I was told at the time by a Storm Trysail Club race official that we had won every possible trophy available,” said Sweetser, who also took home a Rolex watch for best overall performance in both the White and Blue fleets. “It was quite a thrill and honor to do so well at such a prestigious regatta.”

“Our crew has always loved doing Block Island. It’s one of those special regattas you really look forward to attending,” says Sweetser. “Block Island is a beautiful location and presents very challenging conditions. What I like most is the unique sense of sailing community that exists during that week.”

Sweetser applauded the decision to contest the North American Championship during Block Island Race Week XXVI, calling it a big commitment on the part of the class.

The J/109 North American Championship is conducted as part of New York Yacht Club Race Week in even years. It’s usually hosted elsewhere during odd years with Chicago, Annapolis, and Long Beach having served as venues. Class president Jim Vos said the J/109 executive committee selected Block Island for 2015 because it is the 50th Anniversary of the prestigious regatta, the Storm Trysail Club has an impeccable reputation for race management, and there has been an influx of new owners along the East Coast.

“I think the big story is that our class is undergoing a real renaissance,” says Vos. “The class held up really well during the economic downturn and now is seeing a significant resurgence. We’re picking up some refugees from the J/105 class and attracting folks from the J/30 and J/35 classes that are seeking a more modern raceboat and a more active racing fleet.”

Vos points out that a race-ready J/109 in excellent condition can be purchased for the relatively modest price of $145,000. He and other class stalwarts have consistently praised the cruiser-racer characteristics of the design launched in Europe in 1996 by J/Boats.

“It is a very comfortable cruising boat, a very stable platform that is perfect for family of four and quite manageable for a husband and wife,” said Ted Herlihy, who purchased his 109, Gut Feeling, in 2003.

Herlihy has done quite well with a family program, which features sons Andy and Dan, capturing three North American Championships with the most recent coming in 2011 off Annapolis. The New Bedford YC member has never brought a professional aboard and spends more time cruising Maine and other locales than racing.

Class members have clearly endorsed the choice of Block Island Race Week as venue for the North American Championship with a whopping 25 boats registered in March, with several more expected. This would establish a new class record for the regatta, which drew 19 boats for the inaugural edition in 2006.

“Block Island Race Week is an incredible experience so it makes a lot of sense to have our signature championship as part of the regatta,” says Rick Lyall, a J/109 owner since 2004. “It is one of the more fun and enjoyable events in the sailboat racing world. It is very well-organized, the race management is top-notch while the parties and awards ceremonies are just awesome.”

Lyall is one of the more decorated skippers in the class, having steered Storm to North American Championships in 2009, 2012, and 2013. Lyall noted that Block Island offers a mixture of distance racing and windward-leeward buoy racing, while the week usually offers some heavy air, light breeze, baffling currents, and occasional fog.

“A North American championship should be a stiff test of skill in a variety of conditions, and Block Island traditionally provides that,” says Lyall. “To sail consistently well at Block Island is very difficult.”

Lyall estimates there are a number of boats capable of capturing the crown, mentioning past champs Herlihy and Vos right off the bat. He points out the “tremendous track record” of Rush and includes Caminos (Donald Filippelli), Emoticon (Jonathan Rechtschaffer) and Mad Dogs (Adrian Begley) as potential spoilers.

“It’s going to be a really tough fleet. There’s a group of extremely competitive class stalwarts coming along with a bunch of newcomers that we don’t know that well,” says Lyall, the class president from 2007 to 2012. “I’m really jazzed about this regatta because I can tell it’s going to be a real dogfight.”

“In this class, no one stays champion for very long. All the veteran guys, like Rick Lyall and Bill Sweetster, have figured out the boat over the years,” says Vos. “No one dominates at this point in time because there are no more secrets.”

There are currently 371 J/109s sailing in 15 countries with large fleets existing in Europe and North America. The 35-footer was initially a hit in France and the United Kingdom before branching to The Netherlands and Belgium. While the majority of U.S. boats are located on the East Coast, there are also strong fleets in the Great Lakes, Gulf ports such as Galveston and the West Coast from San Diego to Seattle.

“I’ve found the 109 to be a well-designed boat,” says Vos, who purchased Hull No. 55, the second launched in the U.S. “The deck is laid out nicely and there’s not a sharp corner anywhere. The cockpit is large and the sail controls are fairly spread out. It’s just a delight to drive with finger-touch steering.” 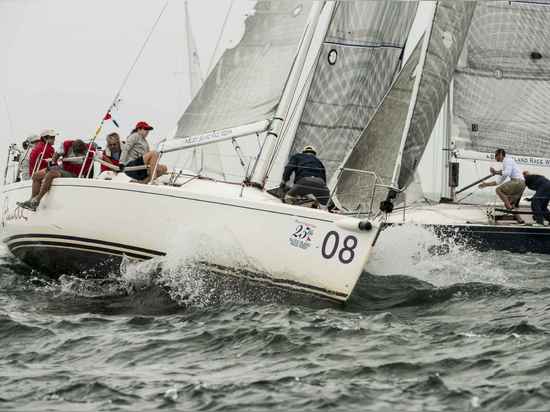