LENDING CLUB 2 completed a record-breaking Newport to Bermuda run, sailing the 635 nm in under 24 hours.

Lending Club 2 successfully completed an attempt to break the Newport to Bermuda course record with plenty of time to spare.

The 105ft trimaran simply obliterated the previous record that had stood for 15 years, taking less than 24 hrs to complete the 635-nautical mile ocean crossing from Castle Hill Lighthouse in Newport to

The new record, subject to ratification by the World Sailing Speed Record Council, is 23hr 9min 52sec at an average speed of 27 knots.

The trimaran, believed to be valued at about $3 million, completed its record attempt at 1:44.32am — shaving a staggering 15 hours off the previous mark set by the late Steve Fossett aboard the catamaran PlayStation.

After tying up at the dock at the St George’s Dinghy and Sports Club, Lending Club 2’s eight-man crew, led by Renaud Laplanche, the Lending Club CEO, and Ryan Breymaier, his co-skipper, celebrated their successful campaign over beer and pizza.

“To beat a record like this you really need a great boat, great weather conditions and more importantly a great crew, and that’s what we really had,” Mr Laplanche told The Royal Gazette. “Everyone was almost 100 per cent almost all the time and that’s what it takes to get from Newport to Bermuda in under 24 hours.”

Mr Breymaier added: “It’s always amazing every time you have an opportunity to sail on a boat like this. You just feel like you’re privileged because it’s unbelievable the feeling that you get; you’re almost like an airplane trying to take off all the time. It was faster than we expected as well and we were happy.”

After waiting for a cold front to pass through the Newport area, the impressive trimaran started its journey at 2.34am yesterday, crawling along at 5.5 knots in gentle breezes before eventually getting up to speed in open seas.

“We knew the start would be light breeze and it took us 15-20 minutes to get out of the harbour and then we started getting some breeze,” Mr Laplanche said. “We had faith in the model and the weather forecast.”

Three-and-a-half hours into the passage, Lending Club 2 had reached speeds of 30 knots and by the 12-hour mark was halfway to her destination. 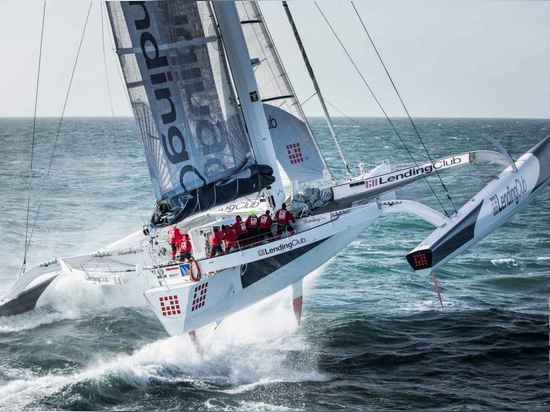 Lending Club 2 prepares for the Newport to Bermuda record attempt.