Sailing legend Alan Bond died in Perth, Australia, on June 5 at the age of 77, after failing to recover from open heart surgery.

In the sailing world, Alan Bond will forever be celebrated as the larger-than-life figure who, in 1983, finally broke the New York Yacht Club’s 132-year dominance of the America’s Cup. Bond’s legendary 12-Metre, Australia II, was designed by the maverick naval architect Ben Lexcen, whose concept for the winged keel was the magic bullet that enabled Australia II to score that famous victory over Dennis Conner’s Liberty in Newport, Rhode Island.

Celebrating the 30th year since America II's victory, Australia's Hamilton Island Yacht Club was the first America's Cup Challenger of Record for the next America's Cup, hosted Bermuda in 2017, but it was also the first team to pull out. Since an early age, “Bondy” had always dared to be different. Born in London in 1938, he emigrated with his family to Fremantle, Australia, at the age of 11. He left school at 14, set up a sign writing business with his father, and by the age of 21 had made the first of his many land deals, purchasing a five-acre block in the Perth hills for £13,000. Very soon afterwards, Bond made his first million and his wealth and social standing skyrocketed until by 1978, he was named Australian of the Year.

In 1974, Bond launched the first of his many America’s Cup campaigns, but it wasn’t just about the contest itself. He used the profile of his Cup campaign to leverage interest and investment in Yanchep Sun City, a luxury lifestyle city that would house 200,000 people just outside Perth. In his biography, The Rise and Fall of Alan Bond, Paul Barry records the property developer’s irate response to a sceptical journalist at the time.

“Anyone who considers racing for the America’s Cup isn’t a business proposition is a bloody fool. There can be no other justification for spending $6m on the Australian challenge unless the return is going to involve something more than just an ornate silver pitcher.”

Whatever Bond’s ulterior motives, it is the triumphant lifting of that ornate silver pitcher on 15 September 1983 for which he will be most fondly remembered. It was the day the Boxing Kangaroo gave Conner and the stuck-up members of the New York Yacht Club a bloody nose. Australia’s prime minister, Bob Hawke, declared an impromptu national holiday, stating: “Any boss who sacks anyone for not turning up today is a bum.”

In every way, Alan Bond had always sailed close to the wind, particularly in his devil-may-care attitude to business. By 1992, however, this cavalier approach caught up with him, as we was declared bankrupt with a personal debt of Australian $1.8 billion, and he spent four years in jail for perpetrating Australia’s biggest corporate fraud. On his release from prison, Bond relocated to London and briefly made a small fortune from diamond and oil investments in Africa, before this was wiped out by the global financial crisis in 2008. 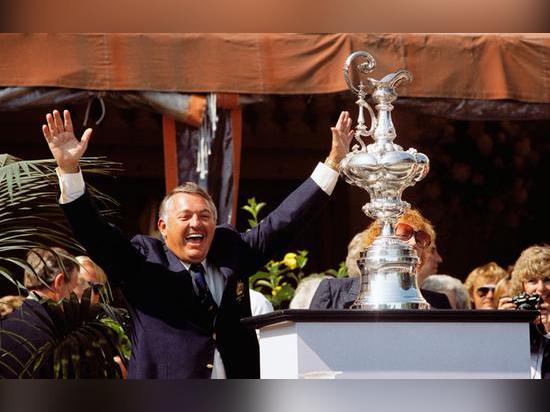