In a special ceremony on 1 December, IMO Secretary-General Koji Sekimizu presented the award, in the form of a silver dolphin, to Dr. Salgado y Salgado.

Mr. Sekimizu highlighted Dr. Salgado y Salgado’s distinguished career as an academic in international maritime law, during his 40-year tenure as a professor at the National Autonomous University of Mexico (UNAM), and his long association with IMO, dating back to the 1980s when he regularly attended IMO meetings as part of the Mexican delegation.

Dr. Salgado y Salgado has had more than 90 articles published in national and foreign journals and has written six books on international maritime law, including one specializing on the work of IMO, its tasks and achievements.

Dr. Eusebio Salgado y Salgado holds a degree in Law and Diplomatic Sciences and a doctorate in International Relations and Law from the National Autonomous University of Mexico (UNAM).

He is the author of the Manual de Derecho Internacional Marítimo (International Maritime Law Manual), which has been the basis of various studies and specialized research into maritime transport in the Spanish-speaking world.

He has supervised nearly 300 theses during his career and, among others, was awarded the National Prize for Legislation and Maritime Law in 1988.

He has written over 98 articles on subjects within his area of specialization in national and foreign journals and has published six books on international maritime law, including one specializing on the work of IMO, its tasks and achievements (1991).

The International Maritime Prize is awarded annually by IMO to the individual or organization judged to have made the most significant contribution to the work and objectives of the Organization. It consists of a sculpture in the form of a dolphin and includes a financial award, upon submission of a paper written on a subject relevant to IMO. 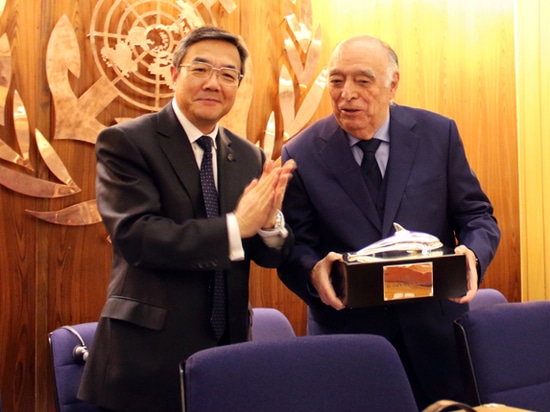