The 11th annual Portsmouth Dragon Boat festival is set to go ahead this weekend after being postponed earlier in the year.

The Dragon Boat festival was originally scheduled for May, but was postponed after an unusually warm April resulted in blue-green algae on the festival’s lake.

This weekend, with the weather forecast looking good, the team organisers are hoping for a successful event.

Carol Jenkinson, a member of the festival’s organising committee, said: “Everything’s definitely going ahead. It’s a fun family day out – we just ask that people don’t fall in the water.”

Recent tests have shown the algae at Lakeside, North Harbour is now at a safe level for racing to take place.

There are more than 30 teams expected to take to the water at Lakeside over the weekend, with each team raising money for a chosen charity.

One team taking part in the festival is music promoters Beats & Swing, who have put together a team of local musicians and DJs to raise money for Tonic Music for Mental Health, a Portsmouth-based charity.

Ahead of the race, team member Luke Fuller said “I got together a big team of acts and DJs who play for us, and they were well up for it, but we have done absolutely no training.”

Despite their lack of preparation, the team have already raised more than £1,000, with more donations expected across the weekend.

The event takes place tomorrow and Sunday (03 – 04 October) with racing due to start at 10am. Entry for spectators is free, so if you’re in the area, go along and show your support for those taking part. 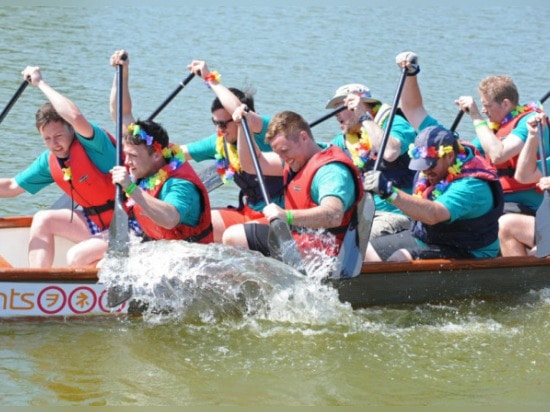