The first of two 45' twin-screw 940-hp steel tugboats was delivered to the New York Power Authority (NYPA) in October. - See more at: http://www.workboat.com/component/content/article?id=9905#sthash.hD2iNhBY.dpuf

Designed by the Bristol Harbor Group Inc., Bristol, R.I., and built by Great Lakes Shipyard, Cleveland, the 45'×19'7"×6'1" Daniel Joncaire II is designed to operate in the ice of eastern Lake Erie, where the waters flow into the Niagara River and hydroelectric plants. The tugs will be used to install and remove an 8,800' floating ice boom, consisting of steel pontoons linked together and anchored to the river bottom at Lake Erie’s outlet to the Niagara River.

Bill Jordan, senior naval architect at Bristol Harbor Group, said designers sought to strike “a balance that fulfills the demands of all the competing criteria,” and be environmentally friendly.

“The design is tailored to meet the specific operational needs of the New York Power Authority to suit their unique service and deck operations, while satisfying proposed Coast Guard Subchapter M systems, machinery and stability requirements within a very compact package,” Jordan said.

The tug is part of a $4.9 million two-tug contract. (The costs will be equally shared with OPG.) The second tug, the Breaker II, will have the same design but will incorporate changes based on what NYPA crews experience with the first tug this winter. It is due for a 2017 delivery.

Propulsion for the new tug comes from a pair of Caterpillar C18 engines each producing 470 hp at 1,800 rpm. The engines turn Michigan Wheel 46"×28" 4-bladed nibral propellers through Twin Disc MGX-5135SC gears. The package gives the tug a rated speed of 6 knots.

There is a Simrad electronics suite in the pilothouse and the tug has Jastram controls. On deck the crew of four has aNabrico DF-156-20-7-HE towing winch to work with. Bollard pull is estimated at 11 tons.

“We also incorporated American Bureau of Shipping reinforcement requirements for service in seasonal ice, maximized visibility while complying with a restrictive air draft limitation and incorporated details to ensure a high degree of reliability,” said Jordan.

The new tugs have more horsepower, bollard pull and equipment handling capabilities than existing vessels in the NYPA fleet.

“The new boats have a markedly modern profile, with the pilothouse 15' above the waterline for better visibility while maneuvering, compared to deck-level helms on the old vessels.”

The launch of the Daniel Joncaire II was followed by a keel laying ceremony for one of Great Lakes’ 74'×30'×11'6" HandySize-class 3,400 hp twin screw tugs, to be built for harbor towing operations in Puerto 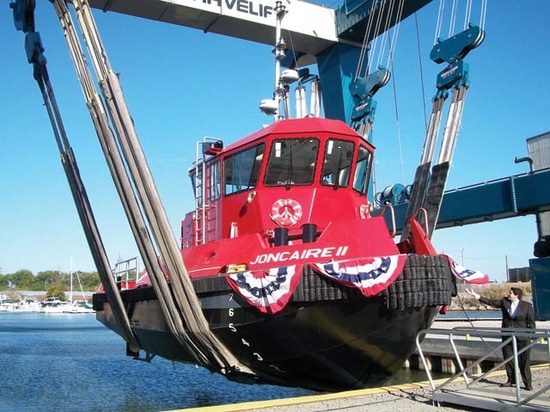