"Ever since the early 2000s diesel engine manufacturers have been using common-rail fuel injection to meet ever-tighter emissions regulations," says Floris Lettinga, Yanmar''s Marine Sales Department Manager. "These high-pressure systems deliver highly atomised fuel to injectors, which are usually electronically managed, via a single pipe to give improved performance and better fuel economy with reduced emissions and smoother, quieter running, but until now have been available only with engines of more than 110mhp. But Yanmar is now offering all of these benefits with a range of four all-new diesels with power ratings of 45, 57, 80 as well as 110mhp."

These small, compact and lightweight four-cylinder units fall within the requirements of the USA''s EPA Tier 3 and the similar EU RCD2 (2016) emissions regulations, which apply mainly to diesels upwards of 100mhp.

In addition to being cleaner and more efficient than their mechanically controlled forerunners, the ''plug-and-play'' JH-CR 2.19 and 2-litre engines have also been designed for easier boatyard installation. Fitted with a signal converter that operates with NMEA2000 protocol, they can be directly connected to the integrated electronic instrument system of all the leading manufacturers to provide full engine data on multi-function displays. Also a special feature of the JH-RC engine series is that they offer a secondary alternator option, with a choice of 12Volts at 125 Amps and 24 Volts at 60 Amps. Transmission options include mechanical and hydraulic gearboxes and saildrives. "The new engines are an ideal fit for both small planing craft, such as RIBs, tenders and day cruisers as well as larger displacement powerboats and sailing cruisers up to around 60ft," Floris Lettinga says. "With their high power density, greater efficiency and easy installation they are also a highly attractive proposition for repowering," he adds. Yanmar is showing the new engines on stand G57. 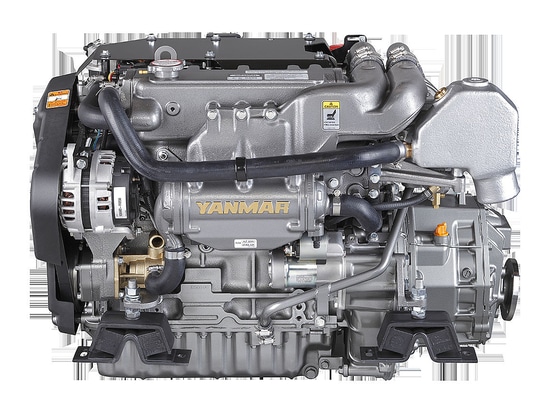